Abstract
Sonny the Quarter Horse presented for examination and acupuncture to reduce her muscle pain and increase mobility. She has a history of chronic laminitis and a torn deep digital flexor tendon of the left hand, which has led to chronic lameness and increased time laying down. She received three acupuncture treatments over the course of four weeks. Treatments were centered around neck trigger points, taut forelimb muscles and improving circulation to the distal forelimbs. After the treatments, there was an improvement in bilateral neck flexion, decreased time laying down and a mild improvement in lameness.

History and presentation
Sonny is a 14-year-old Quarter Horse mare who was presented for improvement of muscle pain associated with chronic laminitis. She has a history of bilateral forelimb laminitis, and a torn deep digital flexor tendon on the left hind limb with chronic cellulitis. Previous treatments include corrective shoeing and sweat bandaging of the left hind limb. Recently she was hospitalized for 1 month for forelimb pain and hind limb weakness. She was treated with IV DMSO and 2 grams of Phenylbutazone daily. Currently she is maintained on 2 grams of Phenylbutazone as needed for pain, and lives in a 12×24 stall with small amounts of hand walking and no turn out. She receives an all alfalfa diet, and is up to date on vaccinations.

Physical Examination and Clinical Assessments
On initial exam Sonny was visibly uncomfortable standing and reluctant to move. While standing, she had her right forelimb forward and “pointing” with more weight on the left forelimb. She was continually shifting her weight backwards during initial observation. Radiographs taken at the facility where she was hospitalized displayed moderate rotation (exact measurement not taken) of P3 on both the right front and left front. On physical exam, Sonny had normal vitals but did have increased digital pulses in both forelimbs. During myofascial exam and DAPE, Sonny was found to have tight bands along the cervical region bilaterally. There was tight myofascial restriction throughout her thoracolumbar region and over the ribs. She had very little topline muscling. On her forelimbs, her triceps, supraspinatus and infraspinatus muscles had tight bands bilaterally that were sensitive to palpation. On her hind limbs, the semimembranosus and semitendinosus were tight. She was reluctant to lift both forelimbs. While assessing range of motion in her cervical vertebrae, she had a difficult time in both the right and left direction, and turned her nose sideways instead of engaging her neck. There was swelling in the left hind limb extending from above the coronary band to the distal end of the hock that was not painful to palpation. She had normal neurologic responses to limb placement. When walking, she appeared more painful on the right forelimb than left, and was extremely weak in the hind limbs.

Definitive Diagnoses
Laminitis with associated cervicothoracic and thoracolumbar pain
Radiographs from the referring veterinarian and previous history confirm the presence of laminitis with bilateral rotation of P3. Due to the continued “rocked back” stance, Sonny has muscle tension throughout her neck and hind end (thoracolumbar/SI/semimembranosus and tendonosis). Sonny has not been tested for Cushing’s disease, PSSM or EPM. Sonny has not shown other signs of Cushing’s disease such as poor hair coat or fat deposits, but laminitis can be associated with Cushing’s so it may be of benefit to test for the disease. Sonny being a Quarter Horse does predispose her to PSSM, however there was no history of tying up or muscle dysfunction during her performance career. Sonny has not shown neurologic deficits, and muscle atrophy is the only sign she is displaying of EPM, which is more likely a result of disuse.

Medical Decision Making
In the case of Sonny, my priority was to try to relieve muscle tension that is present due to her continued attempts to compensate for her forelimb pain. The goal was to provide treatment according to the MAIN technique. Central nervous stimulation was achieved with BL 10 and Bai Hui, which were also points that benefited the patient due to the influence on neck pain (BL 10) and endorphin release (BH). The caudal bladder points BL 11-13, 23, 27 also provided central nervous stimulation, The peripheral nervous system was stimulated with the points ST 36, LI 11, TH 14 and LI 15. There was a large amount of stimulation to the myofascial with the trigger points present in the neck, shoulder and triceps, as well as the semimembranosus and semitendinosus. 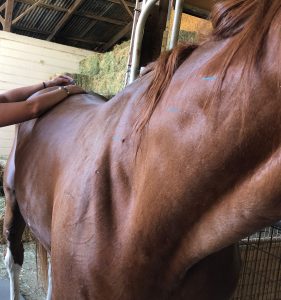 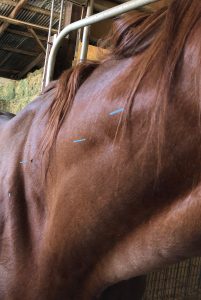 Acupuncture Treatments
To begin with Sonny’s first treatment, I initially placed needles at GB 21 and Bai Hui for the autonomic nervous stimulation as well as endogenous endorphin release. These were also safe locations to see how she would react to needle insertion. All points for all treatments were performed with dry needling techniques only. Size 0.25 30mm coated Seirin needles were used in all points except for ting points where 0.20 30mm coated Seirin needles were used. In the first treatment points included LI 14 bilaterally, BL 10 bilaterally, LI 11 bilaterally, TH 14 bilaterally, BL 40 bilaterally, GB 39 bilaterally, ST 36 on the right hind, BL 25 bilaterally, BL 21 bilaterally and trigger points on each side of the neck. For the second and third treatments, additional points included BL 11-13 23, 27 bilaterally, PC 6, and ting points around both forelimbs. The treatment was primarily based around the forelimb/neck pain present as a result of the chronic laminitis, as well as the compensatory hind end pain through the bladder line in the thoracic and lumbar spine regions. BL 10 and LI 11 were used for their influence on neck pain and well as their close proximity to trigger points. LI 15 and TH 14 were used for the supraspinatus and infraspinatus trigger points. Caudally, BL 40 and GB 39 were used for the pelvic limb pain present in Sonny as she tries to remove weight from the forelimbs. Stomach 36 was used for its autonomic nervous system simulation and its role in immune system stimulation. BL 10 and Bai Hui provided central nervous system stimulation. The caudal bladder points added peripheral nervous stimulation. Ting points were used to stimulate circulation and nerve supply to distal hoof structures. In the second and third treatments, the previously stated points were used, and needles were placed into trigger points. The majority of trigger points were located in the brachiocephalicus and splenius muscles on both sides of the neck, as well as the triceps bilaterally. The first two treatments were performed one week apart, and the second and third treatments were two weeks apart.

Due to the chronic nature of Sonny’s pathology, there was not drastic improvement in the three treatments but there was qualitative improvement. Between the three treatments, there was an improvement in the range of motion (flexion) of the neck in both directions. Additionally, there was an improvement in the trigger points (less taut muscle) in the neck and shoulders. The owner reported that following the treatments the horse spent less time laying down. There were no other ongoing treatments added during the course of acupuncture treatments, so it is reasonable to believe that these improvements were a direct result of the acupuncture. There were no adverse events to the three treatments.
At the time of treatment, I did not have access to a laser or electrical stimulation unit. I believe that Sonny could have benefited from both treatments. The use of a laser would have been particularly useful for the left hind limb, where the increased mitochondria stimulation and cell metabolic activity could promote cellular function and increased circulation. The electrical stimulation unit would have been beneficial in areas of extreme muscle tension to provide pain relief and promote circulation to the stressed muscles in the proximal forelimb and neck.
This case taught me that even horses with chronic, severe disease can have major benefits from acupuncture treatments. While acupuncture could not “fix” the radiographic changes and rotation of P3 present in this horse, it was able to improve the level of comfort that the horse experienced as demonstrated by the reduced time laying down and improvement in muscle tension. While there are a few papers examining the effect of acupuncture in laminitis, there are mixed conclusions about its efficacy. A study published in the Canadian Veterinary Journal noted that horses with chronic laminitis positively responded to acupuncture after only two treatments, with an improvement in lameness detected with physical examination and the Lameness Locator. I think that if there was a more thorough investigation of the effects of acupuncture on laminitis, for example digital venograms performed to assess increased circulation, there could be additional evidence for acupuncture as a routine treatment for laminitis. I think it’s important to consider acupuncture as an adjunct treatment for chronic diseases where patient comfort needs to be improved.