Physical Examination and Clinical Assessments: Upon physical examination, Pookee Bear was approximately 3.4 kilograms with a body condition score of two out of five. Her physical examination was normal though due to her thin body condition, she did have generalized muscle atrophy. Pookee Bear does have a congenital deformation in that she was born with only the first three coccygeal vertebrae and is missing the remainder of her tail. Pookee Bear did have good motor function of her tail and was not painful when it was palpated. Her hair coat appeared to lay flat against her skin. Upon palpating the middle thoracic vertebrae as well as the proximal lumbar vertebrae, Pookee Bear would become tense and cry. Most specifically, taut bands were identified in the right and left longissimus and iliocostalis muscles. Pookee Bear also resented palpation of both coxofemoral joints in that she cried. I suspected a palpable pressure point in the area of the right coxofemoral joint. There was moderate decreased range of motion in the coxofemoral joints as well as the right stifle joint. Additional heat and taut bands were identified in the area of the right semimembranosus muscle. When Pookee Bear walked, it appeared as though her hock joints were slightly dropped. Pookee Bear’s neurologic exam was normal. Radiographs of Pookee Bear’s vertebrae and hind limbs were obtained which indicated she had osteoarthritis at her 7th to 8th, 8th to 9th, and 9th to 10th joint spaces of her thoracic vertebrae as well as her 2nd to 3rd, and 3rd to 4th joint spaces of her lumbar vertebrae. Additionally, she had osteoarthritis in her coxofemoral and stifle joints. A comprehensive chemistry panel, complete blood count, urinalysis, as well as a total T4 and Free T4 were unremarkable.

Definitive (or Putative) Diagnosis (or Diagnoses): Pookee Bear’s physical examination findings in addition to the changes noted by Katherine led me to be concerned for an inflammatory condition affecting multiple joints. Pookee Bear’s blood work was unremarkable and given the duration of her symptoms, I felt that an infectious cause as well as an immune-mediated cause could be ruled out as unlikely. Once Pookee Bear’s radiographs were obtained, I felt confident that osteoarthritis was causing the changes in her personality as noted by Katherine as well as changes noted on physical and myofascial examination. Referral for further diagnostics, such as a computed tomography scan and magnetic resonance imaging, could have been considered though financially, this was not an option for Katherine.

Medical Decision Making: After Pookee Bear’s physical exam and diagnostics were performed, it became evident that osteoarthritis was causing her pain and resulting symptoms. When determining the points at which I selected for her acupuncture treatments, I felt it necessary to include points along her thoracic and lumbar vertebrae as well as those close to her coxofemoral joints and stifles. In choosing points in these areas, I felt as though I could address her suspected neuromuscular pain. Specifically, needling points related to her cervicothoracic, thoracolumbar, and lumbar spinal nerves as well as her sciatic, tibial, fibular, and cranial gluteal nerves were of the most importance. My plan was to use dry needles, which when triggering specific acupressure points should cause the release of endorphins and enkephalins in turn reducing the sensation of pain that Pookee Bear was feeling. In addition to the dry needling that I performed, I did encourage Katherine to incorporate routine massages of her dorsum, hips and stifles at home. I was limited to only dry needling as I did not have access to an electrical stimulation unit or laser therapy. Laser therapy would have been a good addition to Pookee Bear’s treatment regimen in that it could have helped to reduce inflammation within her joints as well as the taut bands I palpated. Given that Pookee Bear was a feline who had never experienced dry needling, I was concerned that she may not tolerate the placement of the dry needles let alone the addition of electrical stimulation if it had been available to me. After discussing Katherine’s schedule as well as her finances, she agreed to return with Pookee Bear weekly for a total of five weeks. 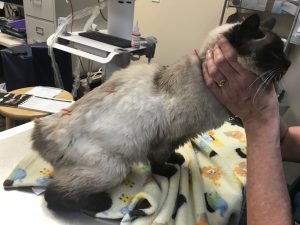 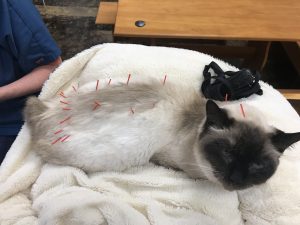 Outcomes, Discussions, and References: I feel as though Pookee Bear benefited from her acupuncture treatments. Within five minutes of the placement of the dry needles for her last four treatments, she became relaxed. Pookee Bear tolerated her treatments very well. Pookee Bear did not have to be held down in order to stay in one place and not move nor did she have to be coaxed with food for her treatments. As her treatments progressed, she became relaxed and even fell asleep in her last three treatments after about eight minutes of the dry needles being placed. Though, Katherine and I could not discern if her gait looked improved or if her mobility was better, Katherine noted that she was more able and willing to jump on and off furniture. Pookee Bear had not directly jumped from the floor up to Katherine’s bed in two years though after the fourth acupuncture treatment, Pookee Bear began doing this again. Katherine discovered a big change in her demeanor in the days that would follow her acupuncture treatments. Katherine reported that she was more affectionate and that her appetite had increased. I found that after her final examination two days after her final acupuncture treatment, the hair along her dorsum seemed to be stand more upwards. I could not identify any further taut bands in her longissimus and iliocostalis muscles. The range of motion in her coxofemoral joints was improved. When she walked, I could not notice a discernable difference in her hocks appearing dropped. Unfortunately, Pookee Bear did still cry when her stifles were palpated and there was still some warmth in her semimembranosus muscle. I feel that if she had allowed for more needles to be placed around her stifles, that she could have had more relief from her discomfort in her stifle joints. If I had access to laser therapy, not only could I have used it on all of her affected areas but I could have used it to target her most sensitive areas like her stifles, which she would not allow me to places needles in. This in turn would have allowed for increased pain control.
Describe Your Impressions of this Medical Acupuncture Experience: I was surprised to have made a difference in Pookee Bear’s discomfort. Initially, I was concerned that she would not be amiable to her treatments though I was proven wrong. I feel that pain can often be very difficult to discern in my feline patients. A journal article of interest that is relatable to Pookee Bear given her spondylosis and the fact that she is a feline is from the Journal of Zoo and Wildlife Medicine, Volume 49, Issue 2 (June 2018) entitled “Animal Training and Acupuncture in a Bengal Tiger (Panthera Tigris Tigris) with Hind Limb Paralysis”. The authors, Yi-Wen Lin and Lih-Chiann Wang report on an 18-year old Bengal tiger that received hydroacupuncture, and electroacupuncture, in addition to corticosteroids. These treatments were performed due to paraparesis in the hind limbs and while Pookee Bear differs in that she did not experience any paraparesis, the tiger did positively respond in being able to walk and I suspect became less painful just as Pookee Bear did. The tiger differed in that his response was easier to discern given that his paralysis improved. Pookee Bear was a bit more challenging when determining her improvement from her acupuncture treatments. In general, I think that our feline patients can be much more challenging to interpret but given my clinical impression and Katherine’s feedback, I have to believe that acupuncture is and was beneficial to Pookee Bear as well as many of my future patients.