Immune Mediated and Degenerative Changes in a 11 Year Old Doberman

Abstract
Kona, an 11 year old male castrated Doberman Pinscher, came to me as an elderly dog with many issues, both myofascially and systemically. Many of his problems included immune mediated and neoplastic causes but also general degenerative changes. By focusing on a handful of issues each treatment session we were able to improve some clinical outcomes and comfort.

History and Presentation
Kona, an 11 year old male castrated Doberman Pinscher, was a friend’s dog who has had multiple issues over the past couple years. The major complaints included fecal incontinence, suspected inflammatory bowel disease (IBD), and oral melanoma. Kona first began having intermittent fecal incontinence many years ago, initially occurring once every couple months and then increasing in frequency with time. Though no biopsies were performed, Kona was suspected to have IBD in early 2016 and has been managed with a hypoallergenic diet, Tylan powder, vitamin B12 injections, magnesium supplementation, and probiotics. Lastly, he was diagnosed with oral amelanotic melanoma of the gingiva in March of 2018 after a debulking procedure was performed, where his third premolar was removed. This mass regrew over the next few months and was re-excised on June 22nd, and during this procedure his maxillary fourth premolar was also removed. Other history includes several soft tissue sarcomas completely excised, keratoconjunctivitis sicca (KCS), atopy, mild degenerative mitral valve disease, and color dilution alopecia with secondary chronically intermittent superficial pyoderma.
Kona presented to me because owner was hoping to improve his immune and muscle function as well as give him more comfort in his old age. He has received acupuncture periodically in the past but has never had consistent treatments performed. The previous acupuncture has been tolerated very well but his owner was unsure of its effectiveness.

Physical Examination and Clinical Assessments
On physical examination, Kona had normal vital parameters with a grade II/VI left systolic heart murmur. He had generalized alopecia with multiple growths and overgrown hair follicles. He had mild mucoid discharge in both of his eyes. There was a recovering surgery site where his left maxillary premolars 3 and 4 would have sat with mild inflammation of the surrounding area. The rest of his physical examination was unremarkable.
On his neurological examination, his only deficit was a decreased anal sphincter tone.
On his myofascial palpation examination, he had tightness along his omotransversarius, trigger points along his longissimus and serratus ventralis around T8-11, and lastly tightness of his groin and triceps muscles, all of these were bilaterally evident.

Differential Diagnoses
Many of Kona’s issues already have diagnoses based on previous work ups and will be listed in the next section. Problems without a diagnosis include fecal incontinence, mucoid eye discharge, and his muscle tightness. Fecal incontinence could be due to degenerative, neoplastic, congenital, or traumatic causes. Mucoid eye discharge is generally due to autoimmune, neoplastic, congenital, iatrogenic, or infectious causes. The tightness is due to the myofascia, which likely would have been from an underlying issue, such as traumatic, degenerative, or neoplastic.

Definitive/Putative Diagnoses
Some of Kona’s diagnoses were done at previous referring veterinarians. His IBD was suspected through an initial diet trial and ultrasound findings. With deterioration, Kona needed further management of this disease. While biopsies should have been performed to obtain a definitive diagnosis, owner elected to forego these. His oral melanoma was diagnosed through pathology after removal. With a history of fecal incontinence and evidence of decreased anal sphincter tone, along with the neck tightness and low head carriage, Kona likely has a neurological issue somewhere along his spinal cord. Dobermans are predisposed to the neurological condition known as cervical spondylomyelopathy (CSM) making it my top differential. Other considerations would be neoplastic or degenerative causes. Ideally, imaging of his entire vertebral column would be performed, whether radiographs or MRI. The owner declined this as well. The most common diagnosis for KCS is immune mediated adenitis, which would be my top differential based on his history of other immune mediated diseases and no history of being on drugs that can cause it. Lastly, the tightness of his myofascia I suspect could be from something such as osteoarthritis, but radiographs and other diagnostics would be needed to confirm this, which were declined by owner. 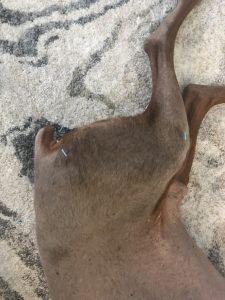 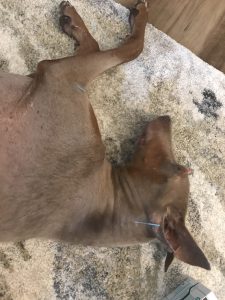 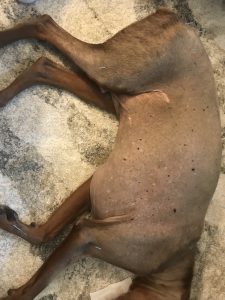 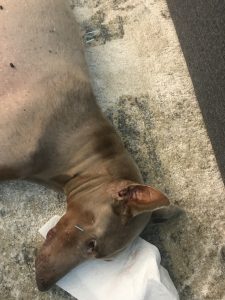 Acupuncture Treatments
All of my treatments used dry needling as the only form of treatment. I performed three sessions over the course of two weeks depending on how he was responding. Needles used were all Seirin brand. Gauges used were 0.20mm and 0.16mm. Lengths used were 15mm and 30mm. As can be seen in the pictures, the needles sizes and lengths were chosen based on location and sensitivity.
Points used and why:
LI 4, LI 11, GV 14, GV 20, Bai Hui, ST 36 – All of these points are considered part of the autonomic nervous system and help with immune function. Due to Kona’s IBD, melanoma, and KCS, I wanted to provide him with as much autonomic stimulation as possible.
GV 1 – This local point was used to address Kona’s fecal incontinence by stimulating his lumbosacral nerves and musculature.
GB 1 – This local point was used to help stimulate tear production for Kona’s eyes due to his KCS.
BL 54, GB 29, GB 30 – These local points are part of the hip joint triad. I suspected that Kona has some mild osteoarthritis in his hips due to tightness in his groin muscles. I believe this could also be contributing to the trigger points along his spine as well as the tightness in his neck and triceps area. My goal was to stimulate these points to help with the pain from the potential osteoarthritis.
BL 18, BL 19 – These local points were in locations where I felt Kona’s most prominent trigger points. By stimulating these points directly I was hoping to loosen up those muscle bellies and help relax him.

Outcomes, Discussions, and References
After Kona’s initial treatment, owner stated that he was quite sore the next day. This was likely due to the amount of needling. Due to my inexperience as well as Kona’s previous success with acupuncture, I believed that he could handle a large number of needles. This is one of my biggest learning points from this case. In that, regardless of previous treatments, it is best to start each patient with a light needle load to begin so that you as an acupuncturist can see first hand how they react to your needling.
Owner believes that acupuncture has helped in terms of his KCS and fecal incontinence. She states that Kona has not had any episodes of fecal incontinence since beginning treatments. Also, she believes that she has not had to remove Kona’s eye discharge as often as before treatments were started.
For Kona’s second and third treatments, I do believe that Kona’s tightness improved throughout his myofascial palpation, specifically his trigger points along his spine. And while owner does say he was sore after the first treatment, she does believe Kona’s attitude towards walks has improved. This could potentially be due to his decrease discomfort of arthritis or just general tightness, but would be hard to say.
While Kona was being treated for a plethora of issues, a region that I could have focused on further would have been his cervical region. Pursuing further diagnostic imaging along his spinal cord would have been ideal to determine if there was a component of CSM or another neurologic disorder. Since his exam revealed tightness along this area and decreased anal tone, improving the communication along his spine as well as treating muscle tightness in his neck through acupuncture, would have helped comfort and neurologic function. If I had the chance to continue treatments on him I would stimulate local points in the C4-C7 region, since that is generally where CSM lesions would occur.
Overall, I learned a lot from this case since it was the first real patient. In addition to what I mentioned above, I felt that after my third treatment my comfort with needling was improving and the handling of my patient through the process was better. I found similarities between acupuncture and clinical practice, the most profound was probably that patients can have many issues and treating them all at once may not be the best course of action. Instead, prioritizing the patient’s problems and focusing on a select few can be important, especially in the beginning.
Research in human medicine has shown that fecal incontinence can be significantly improved through acupuncture. Through stimulation of sacral nerves as well as through systemic acupuncture, improvements of anal sphincter tone through manometry were seen (Franco 2016, Scaglia 2009). It has been difficult to find appropriate studies in regards to treatment of IBD with acupuncture, but there is significant anecdotal evidence that shows it is worth as a consideration, especially since it causes little to no harm (Cheifetz 2016). Lastly, while Xie’s article from VIN is more influenced by TCM, there are overlapping acupuncture points and guidelines that suggest IBD management through acupuncture has seen some success.