Tetraparesis Due to Cervical Myelopathy in a 10 Year Old Pomeranian

Abstract
Coach, a 10-year-old neutered male Pomeranian mixed breed dog was treated for acute tetraparesis for approximately 7 weeks using alternative therapies including laser and acupuncture and made a full recovery. Coach is a healthy senior pet who had one episode of suspected IVDD 6 months prior when he presented with a hunched posture and signs of pain. He responded quickly to restricted activity and oral medications and had no other concerns prior to this presentation of tetraparesis. This case report suggests the significant positive effects of acupuncture and laser therapy, in conjunctive with appropriate oral medications, to treat a condition in which surgery is often performed and may be unnecessary and cause undue pain and trauma.

History and Presentation:
Coach, a 10-year-old male neutered Pomeranian Mix breed dog, was treated using acupuncture and laser therapy, in addition to appropriate oral medications, from May 10, 2018 through June 28, 2018 following a sudden onset of tetraparesis. Coach was evaluated initially through ER and then transferred to the Veterinary Neurology Department at the same facility. When Coach presented to the ER, he had been staying at the pet sitter’s house where he reportedly became acutely unable to ambulate or use any of his four limbs after an altercation with another dog in the home. He did not obtain any punctures or external wounds and it was reported that the altercation was a series of growling and vocalizing but no actual trauma or bites witnessed. Prior to this episode, Coach had been suspected to have a disc herniation approximately 6 months prior when he presented to his regular veterinarian for hunched posture and pain. Coach was treated at that time with restricted activity, an oral steroid, and an oral muscle relaxer. Coach quickly responded to therapy and returned to normal activity with no follow-up visits or reported concerns until he was seen at ER in early May.

Physical Examination and Clinical Assessments:
Approximately 72 hours prior to my initial exam and commencement of treatment on Coach, he visited a local Veterinary Emergency Clinic where he was hospitalized and then transferred to the Neurology Department for evaluation and further care. Upon presentation to the ER, Coach was described as having a right-sided hemiparesis with absent Conscious Proprioceptive (CP) Responses on the right fore and hind limbs with minimal motor function and a resistance to neck manipulation on the right side. His mentation was noted to be normal/appropriate. His vitals were normal at the time of presentation and his blood testing (including a chemistry, complete blood cell count, and blood gas test) were all largely within normal limits other than a mildly elevated Alkaline Phosphatase (ALP). Radiographs of his cervical, thoracic, and lumbar spinal regions were taken and demonstrated a narrowing at the C4-C5 intervertebral disc space. Coach was hospitalized overnight and placed on IV fluids and an IV CRI of Fentanyl for pain management until he was assessed the next morning by the Veterinary Neurologist. When the neurologist evaluated Coach, Coach was noted to have tetraparesis with strong motor function on the left side and minimal to no motor function on the right side with his right thoracic limb being the most severely affected. An MRI was recommended with potential Surgery Consultation as the next step based on the MRI findings. The owners declined this recommendation and opted for conservative management. He was then started on an oral steroid, muscle relaxer, and pain medication and discharged. Thankfully, their regular veterinarian recommended they schedule an assessment and consultation with me to discuss treatment options not limited to rest and medications, but to include acupuncture and laser therapy to not only aid in pain control, but improve function and healing much more rapidly than conventional methods.
On initial examination, Coach was a very sweet boy still in a fair amount of pain. His extra neural abnormalities included an overweight body condition score of 7/9, moderate dental disease, patellar luxation, and lenticular sclerosis, but he appeared overall healthy for a dog of his breed/age. On his myofascial palpation exam and neurologic exam, he had several abnormalities. Coach was non ambulatory. With assistance holding his weight, he would attempt to take a step using his left limbs but would immediately fall over as he was unable to place any weight on his right side. All four CP responses were severely decreased with his right front being most severely affected followed by right hind, then left hind, then left front limb. He had crossed extensor reflexes present in all four limbs but was most exaggerated when Coach was laying left lateral and upside (right) limbs cross extended. Coach had a good neck range of motion in ventral and left lateral directions but was reluctant to turn his head to the right side or orient it in a dorsal direction. Myofascial strain patterns were noted in the thoracic myofacia and taut bands noted on right and left cervical neck. Coach was painful on palpation in his dorsal cervical neck regions from C1-C5, there was also heat noted in this region on manual assessment. The only additional diagnostic testing that was performed on initial presentation was a Valley Fever blood test that came back negative.

Definitive or Putative Diagnosis:
Tetraparesis due to cervical myelopathy with a neuroanatomical diagnosis of C1-T2 myelopathy with right lateralization. This putative diagnosis was based on physical evaluation and neurological examination on Coach at the time of our first visit. It is suspected that this cervical myelopathy was due to Intervertebral Disk Herniation /Protrusion but the definitive diagnosis was not determined due to a lack of advanced imaging but was supported based on radiograph findings.

Medical Decision Making:
Once the presumptive neuroanatomical diagnosis was reached based on physical and neurological examinations on Coach, the medical decision making was based on using the MAIN (Medical Acupuncture and Integrative Neuromodulation) technique developed by Dr. Narda Robinson. With this technique, for each treatment I performed on Coach, I focused on using acupuncture to stimulate the Central, Autonomic, and Peripheral Nervous Systems as well as the myofascial component. Both localized and consequential strain patterns were palpated in the myofacia on every exam performed prior to treatment. 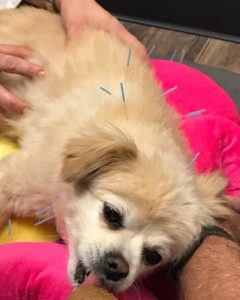 Outcomes, discussion, and references:
In less than 7 weeks of treatment, Coach went from being tetraparetic and completely non ambulatory to regaining full function of all four of his limbs. His CP responses were initially all severely decreased and returned to normal within 4 weeks of initial treatment and in addition, he regained full motor function, which was greatly diminished prior to treatment. Even more impressive was a significant improvement in his mobility noted on his second exam, just 48 hours after his first treatment where Coach was already starting to walk by taking a few steps at a time. It is my opinion that when Coach’s course from injury to recovery was compared to other cases seen and treated previously in many years of practice, it is far superior in his overall return to function as well as speed in that return to function. Coach’s recovery was in part due to his oral medications started at the time of his injury to help him heal, but significantly amplified by his additional therapies including acupuncture and laser therapy which were instituted early on in treatment. This notion that acupuncture and laser therapy speed healing times post Intervertebral Disk Herniation, as demonstrated here in Coach’s case, is backed by science and research. [1][2][3] This case helped me see the healing benefits firsthand of acupuncture and laser therapy on a condition in which previously we were taught as veterinarians to instruct clients to give medications and confine the pet to a cage for an extended period of time. If acupuncture, as well additional alternative therapies, are offered early in the course of treatment of neurologic and musculoskeletal disease and aid in returning an animal to function more rapidly, we may be able to shift away from recommending surgery which is an invasive treatment option, yet still end up with favorable, even superior, outcomes for return to comfort and function more rapidly. It has been shown that acupuncture can both improve pain control and enhance a patient’s quality of life when suffering from many different diseases related to the musculoskeletal and neurologic systems more effectively than pain control medications alone. [4] It seems logical that we as veterinarians should not be withholding this significant benefit to patients afflicted with many different disease and degenerative processes we encounter every day in practice.