Abstract:
Quarter horse mare presented for infertility of three years duration and early pregnancy loss. Regumate (altrenogest) has been used in the previous successful pregnancy but has not been successful in keeping her in foal any length of time since. All breedings have been via artificial insemination using cooled, shipped semen. Acupuncture was tolerated well, and a 14-day pregnancy was achieved, however no fetal heartbeat was seen at 30 days.

History Presentation:
“Heartland Melody” a 20-year-old Quarter Horse mare presented on 5/4/2018 for evaluation for breeding via artificial insemination using cooled shipped semen. Past two years attempts at the same stallion/mare pairing has been unsuccessful. On ultrasound exam she has a cyst in her right uterine horn, determined not to be of consequence to fetal recognition. She has recurrent equine uveitis in the left eye that is currently in remission. No other known health or medical concerns. Owner was amenable to adding acupuncture to normal breeding protocols to attempt to increase chances of a live foal. Melody has no previous issues of uterine pooling, culture negative, no endometrial biopsy was performed.

Physical Examination and Clinical Assessments:
Transrectal ultrasound examination on 5/4/2018 showed a 28 mm follicle on the left ovary with mild to moderate edema of the uterus, no fluid in the uterus. Plan to order semen on 5/7/2018, breed on 5/8/2018. Semen did not arrive until 5/9/2018 and acupuncture was used at the time of breeding (see below). Pregnancy check via transrectal ultrasound on 5/23/2018 showed a pregnancy, however the recheck ultrasound on 6/6/2018 did not yield a heartbeat. Melody was treated with Regumate since insemination. Two other inseminations were attempted, none yielded a 14-day pregnancy. Acupuncture was used at each time of insemination.

Putative Diagnosis:
Infertility of unknown origin, Melody would need a uterine biopsy and possible endoscopy of her uterus to determine a full diagnosis of her infertility if a diagnosis could be found. Due to her age, the owner elected to discontinue breeding her.

Medical Decision Making:
Initially, I was conservative in my point selection, Melody is a sensitive mare and I wanted to reduce anxiety. This is a list of all the points considered, treatment is listed below.
Central: GV14 and Bai Hui to stimulate parasympathetic input reducing anxiety and pain wind-up.
Peripheral: ST 36 and SP 6 for edema movement and stimulation of autonomic regulation, GB 25, BL 22, BL 23, BL 24 are listed as spinal nerve components for reproduction.
ANS: ST 36, BL 27 for parasympathetic stimulation
Myofascial component: BL 10 and local cervical trigger points due to response of horse on myofascial exam to stimulate the Golgi tendon organs to reduce muscle tension in the omotransversarius and brachiocephalicus. 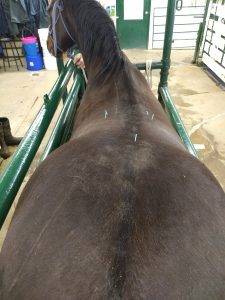 Outcomes, Discussions and References
Unfortunately, no viable pregnancy was achieved with Melody. Without further diagnostics it is difficult to know exactly why she did not conceive. She tolerated the treatments well, was more agitated on the 16th than she had been in previous treatments. In a literature search, there is very few controlled studies in the horse comparing acupuncture to other treatments (per IVIS.org AAEP proceedings), most of the proceedings discussed reproductive use in humans which appears to have been accepted as a form of treatment for infertility.