Abstract
“Ollie” is a ten-year-old, neutered male, Labrador Retriever Mix. The owners sought medical attention for him because his mobility has declined significantly over the past couple months. Symptoms include not jumping into vehicles anymore, seems less energetic, and he doesn’t wish to play with the other very active dogs that they have in their home. Acupuncture was recommended as a large part of the treatment protocol for the presenting complaints. The goal was to determine whether acupuncture will be a viable treatment to improve and maintain “Ollie’s” quality of life, comfort, activity level, and mobility. Results have been very positive and the owners have chosen to continue using acupuncture as a modality to improve his life at home. He has more energy and is significantly more active, seems less painful, will jump into and out of vehicles willingly, and interacts more with the rest of the pets in the home.

History and Presentation
Signalment: The patient is a ten-year-old, neutered male, Labrador Retriever Mix canine. His name is “Ollie” and will be referred to as such throughout this report.

Chief complaint(s):
The following issues had developed over the past couple month per the owner:
1. Declining mobility level
2. Not jumping into vehicles as he had normally
3. Less energetic
4. Not playing with the other active dogs in the household as he once had

History and present illness: From approximately December 2012 through April 2013, Ollie suffered from what was determined to be a soft tissue injury. Radiographs at that time did not reveal any skeletal abnormalities that were apparent. The pain appeared to be isolated to the left shoulder. Clinical signs per the owner’s and our observance at the clinic dissipated by April 2013.

No significant medical history was noted on routine physical exams aside from intermittent seasonal allergies from April 2013 until June 2016. June 2016, Ollie presented for having three bouts of extreme pain where he would cry out for a few minutes at a time. No amount of consoling would cause it to subside. Based on clinical signs it was determined that there was an impinged nerve in the cervical spine region. Treatments over the next 5 months included oral carprofen, oxycodone for 3 months, class IV laser treatments, and activity restriction. Clinical signs had dissipated by October 2016.

Patient was neutered at approximately the age of seven months. This is the only surgery the patient has had. There have been no known traumas. The patient has always been a very active dog that ran regularly with the owner when he was not suffering from musculoskeletal injuries. There are no other relevant health history in the patient’s life that has led up to May 2018 when the patient presented for evaluation and treatment with acupuncture.

Initial evaluation and examination for acupuncture treatment was performed May 2018.

Physical Exam Findings: The patient was bright, alert, and responsive. Normal systems examined were eyes, ears, lymph nodes, cardiovascular and pulmonary auscultation, oral health, and skin. The patient allowed thorough abdominal palpation with no tenseness or pain which revealed no significant findings. The right thigh circumference was 43.5 cm and the left thigh circumference was 47.5 cm. From approximately T10 through L5, the patient’s coat was ruffled and not as smooth as the rest of his coat. Observation of the patient’s gait revealed a subtle weight shift away from the right rear leg at a walk, trot, sit, and stand. When he sits, he kicks the left rear leg out. When patient is walking or trotting, he hangs his head versus holding it in a normal up and arched manner.

Neurological exam:
1. No deficits of cranial nerves or proprioception were noted on exam.
2. Conscious pain is present in all limbs.
3. The left front leg is the only leg that has an absent or “normal” crossed extensor reflex. The right front, right rear, and left rear legs all have a positive crossed extensor reflex.
4. Patellar reflexes were exaggerated mildly.

Myofascial palpation and exam: There was a palpable heat increase of the skin from L3 through L 5 on both sides of the dorsal midline compared to the remainder of the body. The patient was painful with light palpation of the rear limb adductors. The right triceps are generally tense with light palpation. The left triceps have a trigger point present also.

No lab work had been done at the time of this examination.

Image findings: Radiographs were taken of the majority of the thoracic and lumbar spine as well as orthogonal views of the pelvis. Additionally lateral images were taken of the right and left stifles. There is spondylosis deformans between the following vertebrae: T4-T5, T5-T6, T6-T7, T7-T8, T 9-T10, T 13-L1, L1-L2, and L2-L3. There were no other significant findings of the spine. Both patellas had distal patellar osteophytes and there appeared to be abnormal bony proliferation along the trochlear ridges bilaterally where there likely is arthritis. The fat pads in both stifles appear to be in the normal position and not abnormally compressed due to swelling.

Putative Diagnosis: Spondylosis deformans that has contributed to instability and likely mild Type II disc herniation with impingement on the spinal cord. The lesion is suspected to be in the C1 to C5 region.The putative diagnosis was reached through deductive reasoning when considering current clinical signs, past issues he has been seen for, and several thorough examinations.

Medical Decision Making: The acupuncture approach used was targeted towards relieving myofascial restriction around the areas of concern. Many points were chosen for central nervous influence to heal nerves in the spinal cord that based on clinical symptoms have been damaged. Because nerve damage and impingement can lead to compromised nerve signaling, these effects can lead to dysfunction of other nerves the damaged nerve used to communicate with for normal bodily functioning. Over time, this patient has likely altered his gait to avoid “unnecessary” discomfort which has led to myofascial restriction and dysfunction in normally healthy body regions. Treatment has been focused on relieving restrictions that I suspect to be the initiating cause as well as restriction caused by overcompensation due to gait alterations. 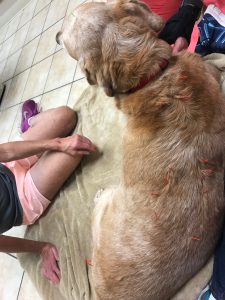 Medical Acupuncture and Related Techniques: All needles used for this patient were 0.16 mm x 30 mm Seirin needles. This patient was very anxious the first few times we performed these treatments. These needles were chosen to provide the neuromodulation with minimal discomfort as acupuncture was introduced to this patient. Needles were left in place for about 20 minutes unless an individual needle fell out. Electrostimulation and Laser treatments were not available. Treatments were administered weekly for three weeks.

Central Neuromodulation Targets: BL 10 was chosen specifically for trigeminocervical reflexes which could decrease wind-up pain specifically as CNS neuromodulation is concerned. The additional bladder points used were chosen in hopes to provide neuromodulation and stimulation to damaged nerves to the mild compression suspected to be occurring on the spinal cord- especially attempting to target ascending nerves to the brain. Those points were BL 11, 12, 13, 18, 19, 20, 21, and 23. All BL points were used bilaterally.

Peripheral Neuromodulation Targets: The left GB 34 and 36 were used to neuromodulate the fibular nerve. Left GB 29 was chosen to neuromodulate the cranial gluteal nerve. Left GB 30 and BL 54 neuromodulated the sciatic nerve. The right side of the patient seemed to have the more significant issues but he was more comfortable resting with the left side up. Neurmodulation cross talk would occur in the spinal cord and still have positive influence on the side that was not provided with acupuncture.

Autonomic Neuromodulation Targets: Because this patient was initially fairly anxious for treatments, points directed towards neuromodulation and upregulation of the parasympathetic system to relax the patient as well as downregulate inflammation were chosen. GV 20 and 14 were used for this purpose. Additional autonomic neuromodulation that was incurred from treatment was any relief of somatovisceral effects that restriction along the thoracolumbar spine may be causing on the body’s organs. The owner had no complaints that led to concern of this nature, but use of these points would undoubtedly contribute to more harmony in the body when the negative neural cross talk was interrupted and neuromodulated. Points that would influence this neuromodulation approach were BL 13, 18, 19, 20, 21, and 23- all used bilaterally.

Myofascial Restriction Targets: Points that were included in the protocol to address myofascial restriction were BL 10, 11, 12, 13, 18, 19, 20, 21, 23, and a left tricep trigger point. These points were chosen due to findings of taut bands and restriction, pain and heat in those areas.

Outcomes, Discussions, and References
Clinical Outcome after three visits
1. The only remaining positive crossed extensor reflex after the third treatment was the left rear foot.
2. Gait is more free and flexible in appearance per the owner and my examination as well.
3. Triceps, adductors, and hips were much less tense.
4. Patient can now jump into the pick up again without assistance and he much more playful with housemates.

A study by Botelho, L.M (1) demonstrates CNS involvement in chronic myofascial pain which indicates the importance of neuromodulation centrally to modulation of descending pain modulation. It also supported neuroplasticity regulation. With this patient, the goal of my treatment was ultimately to decrease pain to allow a normal gait. This patient has experienced ascending and descending nerve compromise due to past injuries to his neck and shoulder. This study supports use of neuromodulation to regulate these CNS contribution that can create and maintain chronic myofascial pain if not addressed.

The bulk of what I learned from this case originated from how the clinical history of this patient related to the injury and pain that he has now. It taught me the importance of how even seemingly “minor” injuries or issues pets may have can contribute majorly to future abilities to function musculoskeletally and neurologically. I believe the past “shoulder” injury contributed majorly to Ollie’s gait coordination after he sustained this issue which then led to neck injury and pain. That pain became “managed” but has led to significant decrease in his ability to function athletically as he once did. Seemingly minor restrictions, pain, muscle tightness, etc are always significant as they lay the foundation for future issues that can become debilitating.