Back Pain in a 5 Year Old Quarter Horse

Abstract:
Beau is a 5 year old Quarter Horse gelding who performs as a show jumper and is currently competing at 0.9 m – 1.0m. He was evaluated for progressing back pain and becoming irritable while being tacked up. Beau was moderately painful through his withers and thoracolumbar back. His lameness exam showed no other lameness issues. Saddle fit was addressed and acupuncture therapy used to treat his back pain. Beau has received multiple acupuncture treatments that have helped resolved his back pain and increase his level of performance.

History and Presentation:
Beau was initially bred to become a ranch-cow horse and underwent a career change when he was 3 years old. This was due to his unwillingness to perform and he often consistently bucked off his rider. He has shown a much more willing attitude for a change to the english discipline of show jumping. He is currently showing at 0.9 m – 1.0m consistently. He is ridden by three different people who each use their own saddle. Beau receives yearly soundness evaluations and was previously last evaluated in January of 2018, where he was deemed to be free of lameness. He is currently up to date on vaccinations and deworming. He had his teeth floated (and wolf teeth removed) in February 2018. Beau is given a ¼ tube of gastrogard once daily while showing but otherwise is not on any medications.
Beau was evaluated initially on June 19, 2018 with the presenting compliant of back pain and being irritable. He had received a massage the week before and the back pain did not resolve. His overall performance has not been affected but his owner is concerned that the back pain appears to be getting worse and is concerned horse is in pain. Beau is ridden 5-6 days week with 2 of those being jumping lessons. He is scheduled to show in about 10 days.

Physical Examination and Clinical Assessment:
Lameness Exam: Evaluated on both hard and soft surfaces. Showed no lameness on the straight or on a circle in both directions. Beau appeared to stiffen his back on the lunge line when in the canter in both directions. His flexion tests of all limbs were negative as was consistent with previous exams. Horse was not evaluated under saddle.
Myofascial exam: Balance – Normal. Myofascial Slide – decreased over withers, thoracolumbar back and sacroiliac region on both right and left, right worse then left. Myofascial exam – trigger points found on both sides of body, above shoulder blade in rhombodius muscle and extending up to withers, over thoracolumbar back, sacroiliac and hamstrings muscles. Range of Motion: Head/Neck – normal, no restriction noted. Front limbs – good mobility, no restriction noted. Withers – decreased range of motion and pain on palpation (horse became irritable and moved away quickly). Back – did not tolerate lateral, ventral or rotation of thoracic, thoracolumbar and lumbar regions (again became irritable and moved away quickly) Sacrum – mildly sore to palpation of tuber sacrale. Pelvic limbs circles- Pelvis titled appropriately but horse was hesitant to perform task.
Overall Impression: Beau is most sore over his withers and thoracolumbar regions. He has mild myofascial restrictions in shoulders, gluteal muscles, and hamstrings. The right side appears to be more affected then the left side.

Working Diagnosis:
Poor saddle fit (did not radiograph back to rule out kissing spines) was the most appropriate working diagnosis in this case. Beau is currently being ridden with 3 different saddles. Assessed all 3 saddles; it was apparent that saddle fit was very poor (1 saddle sat unevenly on back, the other had a tree too wide for his back shape). One of the 3 saddles appeared to fit better and it was recommended to have a professional saddle fitter assess fit but in the meantime was the most appropriate saddle to use.

Treatment Plan:
Acupuncture (AP) therapy was pursued at this time as Beau was scheduled to show in a short time frame and would not be able to be treated with steroid injections due to withdrawal times and owner didn’t want to give him time off. The protocol was determined based on his myofascial exam and adapted according to his tolerance to the therapy. The goal was to neuromodulate his autonomic nervous system to increase parasympathetic tone as well as decreases the hypersensitivity of the nerves supplying his thoracolumbar, lumbar and gluteal regions. 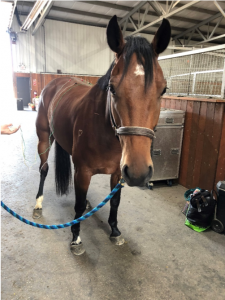 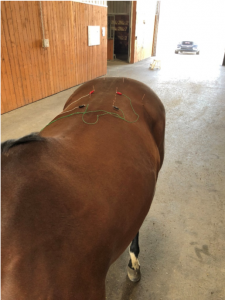 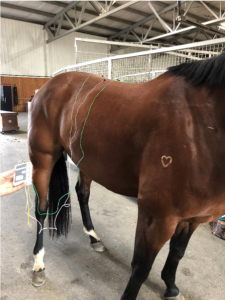 *Electrode stimulation provided by an ITO Es-130: 30 Hz (horse would become agitated if turned on higher)
ᴬNeedles Used for treatment: Manufracture – TeWa, Size: 0.30 x 30mm, coated.
Outcomes: Beau relaxed during his acupuncture therapy but tended to not tolerate BL 13 as well as the other needles so often removed the needle on his own. During his second treatment the flies in the barn were considerably worse than previous treatment and he had a mild reaction during his treatment. He became very irritated, but luckily he is naturally a quiet horse and he quickly calmed down. Electroacupuncture therapy could then be done. Beau responded very positively to acupuncture therapy. His myofascial exam improved with each treatment and he continues to remain comfortable. His owner’s report improved performance and that he is no longer is grumpy/irritable when being tacked up. A significant portion of improvement was likely due to the discontinued use of poorly fitting saddles, however acupuncture appeared to increase his return to work faster and required less time off compared to other horses. This meant he could continue to be ridden and shown, both of which were very important to the owners. Acupuncture therapy also eliminated the need for pain medication or steroid injections and this would have affected his ability to show within a week of starting therapy. Beau continues to receive regular acupuncture during horse shows to improve his ability to perform and to ensure he remains comfortable. I have found Beau’s case to be a good learning tool. He taught both myself and my assistant that you never stop paying attention to the horse no matter how relaxed he may seem. One of the biggest “take-aways” I got from this case was that the horse determines which points I can use that I had to tailor the treatment plan to his changing myofascial exam and to adapt my plan to how the treatment is going.

IMG_3316
Discussion:
Back pain in sport horses has been given increasingly more attention and can be difficult to manage (Deniox JM, Dyson SJ, 2011). In a review presented by Dyson and Greve (2016), they discuss the effect of not only saddle fit on thoracolumbar region of the horses back but also on rider asymmetry. Difference in riders can add differing pressure and can cause abnormal stress which may contribute to small muscular asymmetries. In this case Beau was originally being ridden by 3 different riders with variable skill and in totally different saddles. The relationship between poor saddle fit and pain has been discussed by Harman (1999) and the importance of properly fitting tack on the function of an athletic horse. Once poor saddle fit was addressed, we could focus on treatment. Treating thoracolumbar back pain was studied by Xie et al (2005) in a small prospective study. During this study a comparison of electroacupuncture, phenylbutazone and a control group with saline was done in relation to the management of chronic thoracolumbar pain. A significant difference in back sensitivity was found with electroacupuncture but not the phenylbutazone or saline group. This study, although small, drives one to attempt acupuncture in place of NSAIDs. This was of particular importance to this case because of limited time prior to a show where drug withdrawals have to be taken into consideration. I will continue to integrate acupuncture into my practice and am amazed at how many different ways it can be used.