Abstract
“Tater” was presented for history of left cranial cruciate injury of two year duration. After injury Tater exhibited pain, lameness, and altered gait. Surgical repair of injury was not an option at the time, and rest and Dasuquin were recommended. At initial presentation, Tater’s gait was abnormal and pelvic limbs appeared hyperflexed when walking, and demostrated compensatory changes on all other limbs, midback, and neck. After acupuncture treatments, which included dry needling and massage, lameness has resolved, gait has improved, patient appears more comfortable, and the only supplement Tater is taken is Dasuquin. Tater will continue acupuncture treatments as needed to maintain his new and improved quality of life.

History
Tater is a 6.5 year old (BOD 11/25/2011) male castrated Shih Tzu mix, presented for history of left cranial cruciate injury. Injury occurred two years prior to presentation, and surgical repair was not an option at the time. Currently, Tater experiences intermittent lameness, especially after exercising, and he is taking Dasuquin at maintenance dose. Tater had a dental prophylaxis on 5/18/18 with extraction of 204, 101, and 201, and unremarkable pre anesthetic blood work. Tater is up to date on his core vaccines (rabies, DA2PP), has tested negative for heartworm disease, and eats Purina one dry adult formula.

Medical Decision Making
Acupuncture, medical massage, and supplements are recommended for this patient, and there is no access to Laser and electro-acupuncture due to the nature of the practice. At this time, only orthopedic changes will be addressed, since patient appears otherwise in good health. Acupuncture treatments will address primary injury of left stifle and right hip, and compensatory changes in the rest of the body. Treatments are formulated to modulate the central and autonomic nervous systems, as well as peripheral changes. Central and peripheral neuromodulation will utilize channels involving Femoral and Sciatic nerves thorough Saphenous, and Fibular and Tibial nerves respectively. Autonomic nervous system neuromodulation will make use of channels associated with the Fibular, Trigeminal, and Spinal nerves. Taut bands and trigger points will be treated individually as allowed by patient. Myofascial release, dissolving taut bands and trigger points, decrease of pain and inflammation are the connective tissue changes expected from the above neuromodulation. 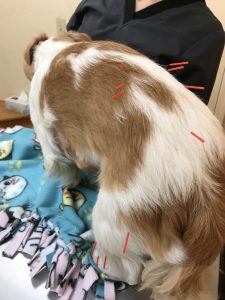 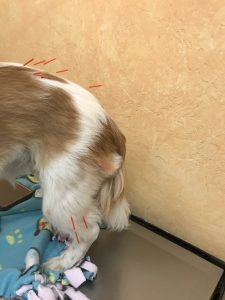 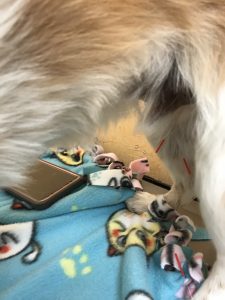