Back Pain in a 4 Year Old Quarter Horse

Abstract
Dixie presented for Acupuncture specifically to be a part of my case study and for generalized integrative preventative care. Her owner reported that she is a great horse, but was often “saddle sour”. I provided 4 acupuncture treatments, which both aided in identifying areas of pain and treated her underlying spinal sensitivity. Her owner reports that Dixie is doing great and has been much better with saddling.

History and Presentation
Dixie is a 4 year old Quarter Horse (QH) mare. She is described as “saddle sour” by her owner, acting up and trying to avoid her saddle placement. Otherwise, her owner states she is a great, well-tempered, and reliable horse. Dixie’s owner hopes to use her as a roping horse and is just starting training with her. She has no current lameness, but her owner reports she has had a previous injury and effusion in her left front carpus that resolved with rest and pain medication. Dixie is not on any medications at this time.

Physical Examination and Clinical Assessments
Dixie’s initial physical examination showed no lameness at a walk or trot during her gait analysis. Her vitals were normal. Her initial myofascial examination revealed sensitivity over her right caudal thoracic spine within the longissimus muscle during palpation. No significant heat was found within muscle groups. She was hesitant to drop her hips bilaterally when performing circling the hind limbs, but postural position was normal before and after active mobilization of joints in all limbs and there were no significant changes to her range of motion in her joints.

Differential diagnosis for her thoracic and lumbar sensitivity include saddle fit, rider posture, vertebral disease (kissing spines, trauma, inflammatory, other), compensation from the previous left forelimb lameness, viscera-somatic response from organ dysfunction, among others. No confirmed diagnosis has been made since diagnostics were not pursued by her owner, but a presumptive diagnosis of soft tissue inflammation associated with possible saddle fit or other causes has been considered. 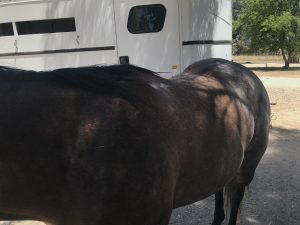 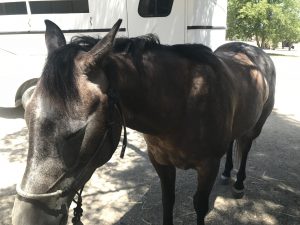 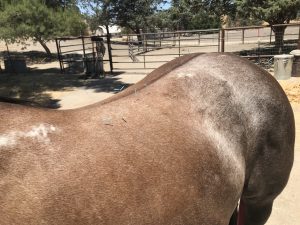 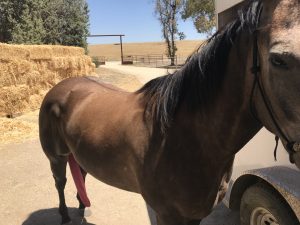 Outcomes and Discussions
Dixie did well with her treatments and was a great first case to help me become comfortable treating equine patients. It was interesting to see how dry needling was both diagnostic and therapeutic in identifying areas of concern along her spine. It was great to see that she is less reactive around her saddle when she participated in regular sessions and her owner truly feels that it has helped Dixie’s soreness. We plan to do regular sessions for Dixie!