Abstract
Jackson  presented for acupuncture to improve his hind limb ambulation after diagnosis of Intervertebral Disk Disease (IVDD) that left him paretic in the hind end. Jackson was treated initially with laser, rest, and pain medications immediately after his injury. Regular acupuncture sessions were added to his treatment regimen a week later to improve his hind limb ataxia and ambulatory response. Jackson’s neurologic deficits have greatly improved, but he has continued to have a right hind limb gait abnormality thought to be related his previous patella laxity and stifle arthritis. This may have been worsened by the paresis from his spinal disease. Jackson is doing well with his sessions and will continue to have regular acupuncture to address his musculoskeletal and systemic health concerns as needed.

History and Presentation
Jackson  is a 15 ½ year old neutered male Cockapoo with an extensive history. He has a history of recurring pancreatitis, but has been stable on a prescription turkey and fish based diet from JustFoodForDogs for over 1 year. He has early stage heart disease from Tricuspid valve regurgitation that is maintained with Benazapril and Pimobendan. Jackson’s owners report he has had surgical repair for patella luxation bilaterally when he was 2 years old. He had been going to regular chiropractic adjustments and swimming sessions for arthritis associated with his stifle disease, which he had participated in the day prior and the day of his spinal pain. On April 25th, 2018 Jackson presented to another doctor in our clinic for back pain and instability in his hind limbs. He was ataxic, knuckling, crossing over, and unable to stay up in his hind end. Radiographs that day showed spondylosis from the 12th thoracic vertebrae to the first lumbar vertebrae, and along his lumbar spine between the 2nd and 3rd and the 5th through the 7th vertebrae. The doctor that day prescribed non-steroidal anti-inflammatory therapy and Methocarbamol, laser treatment of the lumbar spine, and rest. Laser treatments were prescribed by the initial veterinarian to be applied over the next two days using a Companion Therapy Class IV Laser with settings of 750 J / 6 watts for 2 ½ minutes, and then tapered to weekly treatments.

Physical Examination and Clinical Assessments
Jackson presented to me on May 2nd, 2018 for acupuncture to improve the function of his hind limbs in addition to his current treatments. Upon presentation, Jackson could ambulate with all four limbs, but his hind limbs often crossed and slipped, causing him to fall over when walking. Jackson’s right hind limb knuckled occasionally and internal rotation of his right stifle was present. His conscious proprioceptive response in both hind limbs was severely delayed. Myofascial examination showed taut bands in the cleidocervicalis muscles of the neck and biceps muscles. He had significant sensitivity over the lumbar spine with postural kyphosis. Atrophy of his gluteals, quadriceps, and biceps femoris muscles was found bilaterally. Examination of Jackson’s crossed extension reflexes showed abnormalities in both limbs. Jackson also had thickening and effusion in both stifles, more prominent in the right. His vitals were stable with a grade IV/VI systolic heart murmur and no arrhythmias present.

A presumptive diagnosis of IVDD was made based on presentation and radiographic findings, but advanced imaging was not pursued by the owner to confirm this. He also has previously diagnosed surgically repaired patella luxation and associated osteoarthritis within the stifles bilaterally. Jackson’s other diagnosed health concerns include heart disease and recurring pancreatitis, both of which are currently stable and maintained through diet and medications.

Medical Decision Making
My goal for Jackson was to reduce his lumbar spinal pain and improve ambulation and muscle tone in his hind limbs. I also wanted to provide autonomic balance and support to his gastrointestinal and cardiac dysfunction. 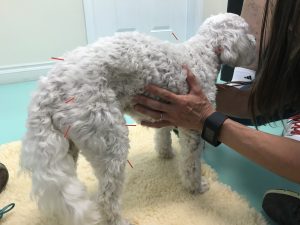 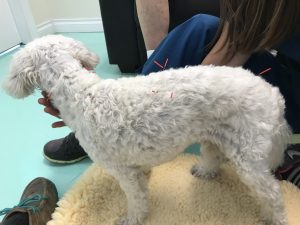 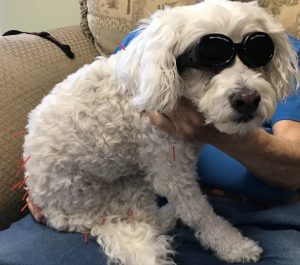 Outcomes and Discussions
Jackson showed improvement in his hind end neurologic function each week. He continued treatments with the Companion Class IV Therapy Laser along his lumbar spine weekly. I was impressed most by his response to the electroacupuncture treatment to his bladder line, which seemed to have made the most dramatic difference in his neurologic function comparing results week to week when added. His owners and I are happy with his response and we are going to continue treating him every other week at this time. Our focus for future sessions will be on his hind limb stifle pain and instability, spinal pain and dysfunction as needed, gastrointestinal function, and cardiac function if he will tolerate additional needling. His owners are going to continue weekly physical therapy sessions to try to improve muscle tone and support for this stifles and hind end function over the next month.
Jackson has been a great long-term case and I have really enjoyed seeing his improvement as we progressed through treatments. I plan to do more research on use of physical therapy and acupuncture for patella luxation and stifle pain in hopes that we can continue to improve his right hind limb function and comfort.