Abstract:
Hazel is a 6-year-old Morgan mare that presented for resistance going forward during training. She exhibited no lameness on her examination but did have significant myofascial restriction and trigger points in the left side of her neck and cranial thorax. In spite of being a difficult patient, I treated her with dry needle acupuncture and cold laser therapy for 4 sessions. Her training issues completely resolved after treatment.

History and Presentation:
Hazel was purchased by the owner 20 months ago. She was a green horse but has been in training for dressage and used for show, trail riding, and recently, fox hunting. Six months ago, she had a bout of diarrhea and gastric ulcers which were successfully treated with omeprazole. She is stalled overnight with turnout during the day and has 10 hours access to hay.

On presentation, Hazel would refuse to move forward into contact with the bit. She would strongly resist efforts to get her to perform lateral bending and collection. She would not be as compliant as she had been in earlier stages of her training.

Physical Examination and Clinical Assessments:
I first examined Hazel on October 27, 2018. Her lameness evaluation was normal on a hard and soft surface. Her distal limb palpation was normal. She did not resist range of motion of any limb joints or flexion tests. Her neurologic exam was normal and she did not exhibit weakness. Hazel did resist cervical ventroflexion with thoracic limb protraction, although she could perform this exercise if pressed. She resisted lateral cervical flexion bilaterally, with most resistance occurring at the level of C3 and C4. Her myofascial palpation exam revealed myofascial restrictions of the subcutaneous layers to the underlying muscle throughout the neck and cranial thorax bilaterally. There was a large trigger point/restriction/swelling within the junction of the splenius muscle, ventral serratus muscle, and cranial trapezius muscle on the left side. This area was exquisitely painful to light palpation.

Problem List:
Hazel’s problems include decreased range of motion in her cervical spine, myofascial restriction of the subcutaneous and muscular tissues of the cervical and cranial thoracic regions, and pain and swelling on the left side of her neck.

Differential diagnoses for the muscle swelling on the left side of Hazel’s neck are the same as those for decreased cervical range of motion.

Putative/Definitive Diagnoses:
My putative diagnoses for Hazel’s pain and decreased cervical range of motion is trauma in her stall coupled with repetitive position use during training. I ruled out infectious, neoplastic, and metabolic causes as unlikely due to her young age and lack of other systemic clinical signs. Hazel did not receive any vaccines recently so that ruled out the iatrogenic cause. Since her signs were acute and she had a normal neurologic examination, Wobbler’s disease is highly unlikely.

Medical Decision Making:
I initially wanted to treat Hazel with Da Feng Men to calm her anxiety and make her more amenable to treatment. I also chose GV14 and Bai Hui as central points for their parasympathetic/neuromodulatory effects. I planned on treating BL10, BL11, BL12, BL13, GB20, SI16, and LI16 for their regional and local effects on the cervical region and the myofascial tension and trigger points. I also planned on using low level laser therapy on the affected areas to increase blood flow and decrease pain locally.

Hazel proved to be a very difficult patient and altered my treatment plan considerably. I used fewer points than planned and, at one treatment visit, none at all. She did tolerate the addition of effleurage, friction, and compression massage during each treatment session. 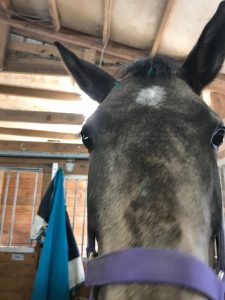 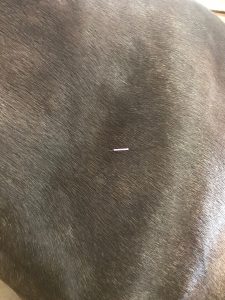 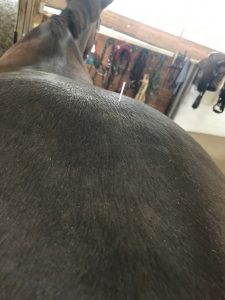 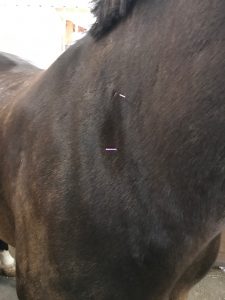 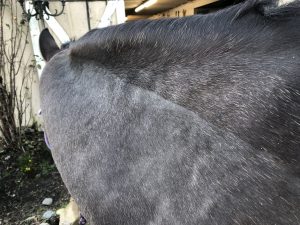 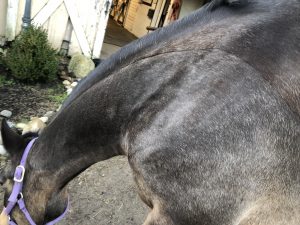 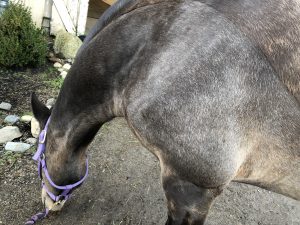 Medical Acupuncture and Related Techniques Used:
Initial treatment started with GV14 and Bai Hui for central neuromodulatory effects (Seirin 0.25 x 40 mm J type). Da Feng Men was attempted (Seirin 0.15 x 15 mm needles) but she would not allow the left needle to be placed. GB21 and LI 16 were placed bilaterally (Seirin 0.25 x 40 mm J type) for regional effects but Hazel became combatant and would allow no further needles placed. A variable wavelength low level laser (Multi Radiance 4 Super Pulsed class 3 low level laser) was used at 3 Watts for 5 minutes over each side of her neck. Manual therapy of effleurage, friction, and compression were applied to the soft tissue swelling on the left side of her neck. The owner was instructed to massage the region daily.

Three days later I treated Hazel with variable wavelength low level laser at 1 Watt for 5 minutes over each side of her neck and continued massage of the trigger point. She showed some improvement but no resolution. She was much less painful to touch.

The third treatment was five days later. Hazel allowed more needles at this treatment. I started with 1 Watt low level laser therapy to the left side of her neck for 5 minutes. I placed GV14, Bai Hui, BL11, BL12, BL13, and BL14 on the left side, and BL 11, BL 12, and BL 13 on the right side. I placed the peripheral point GB21 on the left side and 2 local points within the myofascial trigger point in the left side of her neck. (All needles used were Seirin 0.25 x 40 mm J type.) The trigger point swelling resolved within 5 minutes of treatment after removal of needles. Hazel was significantly improved under saddle so the decision was made to treat her again in 2 weeks.

Outcomes, Insights, Discussion and References:
Hazel showed improvement throughout treatment but the most significant occurred after acupuncture of the large myofascial trigger point. The low level laser therapy decreased her pain to allow placement of more needles at subsequent treatments. She had no further training issues and her myofascial trigger point did not return. Hazel was willing to complete full cervical range of motion and ventroflexion with thoracic limb protraction.

The only adverse event experienced was difficulty in placing needles. In hindsight, starting therapy with the low level laser would have been advised as Hazel was very painful. She has a sensitive personality and this combination made her particularly difficult to treat. Decreasing her pain level with low level laser therapy may have made her experience more acceptable.

This case also highlights that training issues are not always associated with limb lameness or primary behavior problems. Myofascial trigger points and restrictions can cause enough discomfort to elicit adverse behaviors in horses. Although this mare has improved with this treatment schedule, she will likely benefit from treatments in the future due to work-related myofascial restrictions.