This report describes a domestic short hair cat that was seen approximately two and a half months after a right hind limb amputation. On initial examination the cat was found to have normal parameters based on physical examination. However, the owner reported that he would fall over and show signs of being sensitive when the amputation site was touched. Treatment consisted of dry needling, low-level laser therapy and myofascial massage. There has been minor improvement after two treatments but the cat is young and doing very well otherwise. Treatment will continue for one to two treatments a week with the owner continuing to attempt to perform gentle myofascial massage at home.

Hopper was found as a stray approximately three months ago. He was non-weight bearing on the right hind limb from unknown trauma, with bruising on the inguinal area. Radiographs showed a closed, comminuted distal femoral fracture with involvement of the femoral physis. On September the fourteenth his right hind limb was amputated at the coxofemoral junction. He was placed on antibiotics (Convenia) and analgesics (buprenorphine – for five days and meloxicam for three days). He developed a surgical site infection about a week after surgery, which was treated with antibiotics (Orbifloxacin for two weeks). The infection resolved after about ten days.

About a week after surgery (at the shelter) he was observed to be climbing the cage and vocalizing and rolling around the cage. He was adopted by the current owner on October tenth and taken home that day. He continued to have these episodes at home, which consisted of him quickly hopping backwards, sometimes he would push his hind end up into the air and fall onto his side and roll around; he would vocalize like he was in pain and sometimes he would hold his forelimbs straight out. His episodes could be random when he was just lying on the ground, or they could start if he was lightly touched at the incision or an area around the incision site. He was conscious during each episode and would respond to petting. The episodes usually lasted a few seconds or less and he would act normally after, with no pre or post-ictal period. He was started on 200mg CBD oil every 24 hours, which may have helped reduce the episodes. After seven days the CBD oil was stopped and gabapentin was used in attempt to provide analgesia. He has been on gabapentin twice a day for about a month and seems to be responding well, as his episodes have decreased further and he is less sensitive at the amputation site but still responsive to palpation of the area.

Hopper appeared to be a normal, healthy, inquisitive and happy cat.

Hopper had normal heart and lung sounds. Heart rate was about 200 beats per minute; respiratory rate was about 12 breaths per minute. All other parameters were within normal limits. Myofascial examination of the body, excluding the amputation site, did not reveal any tension bands or repeatable trigger points. Palpation of the amputation site did cause him to raise his hind-end or drop it, and shake it a bit at times. He did not cry-out or try to bite but he did move away.

As for most otherwise healthy and young cats, getting him to stay quiet for an examination or treatment was very difficult, as can be seen in the videos. Therefore, his three treatment sessions thus far have focused more on low-level laser therapy than needling or massage.

Neuropathic pain as a result of transecting the nerves during the amputation of the limb.
Nidus of infection
Seizures
Given his age, neoplasia was unlikely

Neuropathic pain as a result of transecting nerves during surgical amputation of the right hind limb.

1st treatment – Dec 7th. Needles were placed at the following points: GV 14, 20, baihui. BL 23, 25 (on the right side) and at trigger points at the amputation site. He tolerated these needles for a few minutes and then shook them out. Low-level laser therapy was then performed with a focus at the amputation site, as well as over both hips and the lumbosacral area.

2nd treatment – Dec 10th. Needles were placed at the following points: GV 14, 20, baihui and at trigger points at the amputation site.

Hopper was not interested in being acupunctured at this treatment and he shook out the needles after about eight minutes. A class two laser was used for about five minutes to perform low-level laser therapy over both hips and also for about five minutes over the lumbosacral spinal area, as well as over the amputation site. He refused to be massaged at this treatment so to avoid causing a negative experience for him the decision was made to avoid massage therapy at this time.

Less kyphosis was noted at this treatment as compared to what was seen at his initial visit.

No tension bands were palpated. The owner was advised to try to massage his neck, focusing on the left side, as this is the area where more stress will be placed given that the amputation was of the right hind limb. She was also asked to try to massage along his back and gently around the amputation site or as much as the cat would allow her to do, at home. We knew that massaging the cat would be a challenge as he is a very active cat and did not want to stay in one spot for very long to be massaged or acupunctured.

3rd treatment – Dec 12th. Needles were used at the follow points: baihui, at trigger points at the amputation site and BL 10 bilaterally, GV 14 and at a tension band palpated just over her left shoulder blade. He only allowed the needles to stay in for about eight minutes and then shook them out. So most of the treatment focused on the use of low-level laser therapy over the amputation site, along the lumbosacral area and cervical area focusing more on the left side of the neck. 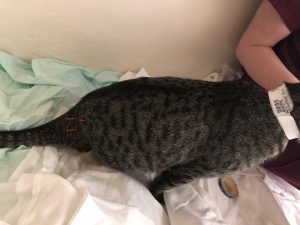 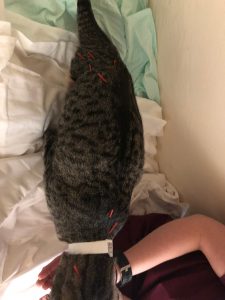 Based on the history, it appears that the CBD oil and the gabapentin helped resolve some of the major signs that Hopper was manifesting initially after the amputation of his hind limb. At the time that the integrative medicine treatments began the main problem the owner reported was how reactive he would be when the amputation site was gently touched. We believed that acupuncture and low-level laser therapy would be beneficial to help allow the transected nerves to heal and also reduce some of the sympathetic simulation that was caused from the amputation. Integrative medicine has the benefit of stimulating the parasympathetic system and thus helps calm nervous activity at the site and also helps him to heal.

Given the fact that this cat was very active and would not tolerate needles for very long, the sites chosen were used to get the most impact with the least amount of needles. GV 14, 20 and baihui were used to stimulate the parasympathetic system. This cat appeared to have a great deal of sympathetic tone after his trauma and amputation so it is believed that these points will help suppress that sympathetic tone. Baihui also has the benefit of helping with pain in the lumbosacral region and neurological dysfunction in the area. The other needles used in the area were placed at trigger points, which were used to help relieve the pain at these points by stimulating the nerves in the region and thus help with healing.

Low-level laser therapy was used to photomodulate the nerves and muscles in the area. This method of treatment helps increase cAMP levels which helps with healing of the nervous tissue at the amputation site and also allows the muscles to heal and relax. This should help provide relief for Hopper and decrease the amount of sensitivity that he has at the site, as well as along the lumbosacral area.

We have seen some mild resolution of the signs as reported by the owner but he is still within four months since the limb was amputated. Hopper is still learning to walk with three legs and is doing a very good job at it. With time there should be a resolution of the neuropathic pain experienced due to the amputation with the use of acupuncture and low-level laser therapy. While the gabapentin is helpful with neuropathic pain the integrative medicine approach will allow the cat to be weaned off the drugs. This is beneficial as it reduces the stress placed on the owner and the cat of trying to give him medication every day as well as removing the need for the cat to be administered systemic medications which may have unwanted side-effects.

Cats, especially young healthy cats, tend to be a bit more challenging to treat with acupuncture but the key is to go slow and allow the cat the time to get accustomed to it and at the same time to not cause any additional stress to the cat with the treatments. The plan for Hopper is to continue to do one to two treatments a week until he either does not need them anymore or until he gets to the point that the treatments are needed less often, perhaps one to two a month.