Abstract:  Diva presented to evaluate pain, trouble jumping and abnormal gait. A physical examination revealed severe muscle loss in the hind limbs, heart murmur and trigger points in the cervical region, lumbar region, bilateral hips, and bilateral elbows. Diagnostics included blood work and radiographs which were relatively unremarkable. A treatment plan was initiated with gabapentin, scientific acupuncture and massage. Over four weeks of treatment, Diva demonstrated a positive response displayed through readily jumping up on substrates, spending more time with her family and being more affectionate.

History: Diva, an 18 year old feline domestic shorthair spayed female, presented to evaluate painful hips and trouble jumping up. Over the last few years, she has been losing muscle mass in her hind end and appears to be increasingly sore. She has a dropped gait in the hind limbs which the owner is a primary concern for the owner. She does not cuddle with the family anymore and is spending more time on her own. She has dry bowel movements and a one year history of increased water intake and urination. She occasionally will regurgitate her food after eating quickly. She has a chronic heart murmur that has been present for over 3 years. She has not shown any symptoms related to heart disease at this time. She is noted to cry more at night in the last six months. There is no history of trauma that the owner is aware of. She has been sneezing more frequently over the last couple of weeks. A few years ago, Diva had a dental procedure with multiple teeth extracted. She is not currently on any medications or supplements. She is eating a Royal Canin Senior canned and dry diet. She is indoor only, has lived in Alberta all of her life and there are two dogs and one other cat in the family.

Physical Exam:  Diva was friendly on presentation and willingly moving around the examination room. A video was taken of her movement, which revealed kyphosis of the lumbar spine and lumbosacral region. There was flattening of the hair coat starting at the third lumbar vertebral spine and extending back to the sacral region. She had a low tail carriage and was excessively flexing the stifle joint as she moved. She appeared interested to jump up on a chair in the room, but then turned away. The owner notes that this avoidance behavior is typical of how she would act at home. A full physical examination was performed and overall noted to have decreased body condition and muscle mass. A heart murmur was identified with the point of maximal intensity at the sternum. Her breathing effort and lung sounds were found to be normal. Abdominal palpation was soft and there was a moderate amount of firm stool palpable in the colon. She had periodontal disease of which her upper canines are of most concern given that they are discolored and have gingivitis. She was missing many teeth after a previous dental surgery. She had taut bands present in the musculature of the dorsal neck. Trigger points were present in the infraspinatus muscles bilaterally as well as subscapularis muscle on the right side. Her hair coat was tightly adhered and there was decreased mobility of the spine. She had trigger points extending from the thoracolumbar junction down to the lumbosacral region, with reaction from the inner and outer bladder line. She had trigger points on palpation of the lumbosacral region and would sit or attempt to move away when that area was palpated. There was a significant temperature decrease from the sixth lumbar vertebrae to the sacral vertebrae. There was myofascial restriction in this area as the hair coat was not freely moveable. Bilateral severe muscle wasting of the quadriceps and hamstring muscles was noted. Taut bands were present in the adductors of both hind limbs. She held her limbs at a ninety degree flexion of the stifles. There was no palpable stifle effusion or laxity of the stifle joints. Neurological examination revealed normal cranial nerves. There was decreased tone in the hind limbs, withdrawal reflexes were normal, and there was no evidence of proprioceptive deficits. Bilateral elbow trigger points were present with the lateral condyle feeling particularly thickened and some crepitus on flexion was palpated in both elbows.

Work-up included a geriatric panel and survey radiographs which were relatively unremarkable.

Diagnosis – Degenerative lumbosacral disease with generalized muscle wasting secondary to sarcopenia and disuse from pain. Based on her history, environment and physical examination, infectious, traumatic and congenital causes were determined to be unlikely. Her blood work was normal and therefore diabetic neuropathy and renal insufficiency was unlikely causes. Access to advanced imaging was not a possibility for this case to rule out other causes.

A decision was made to start with scientific medical acupuncture and massage. The goal is to exert local, regional, and long-loop reflexes to cause neuromodulation, thereby improving pain control, blood flow and nervous supply to the affected tissues (1). Additionally, Diva was started on gabapentin (3mg/kg by mouth every twelve to twenty-four hours) and an Omega-3 supplement. 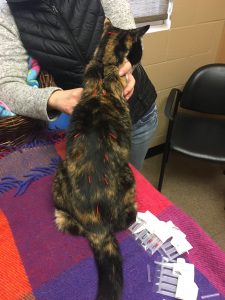 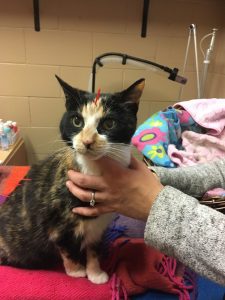 One week later, Diva presented for her second treatment. Her owner noted that she appeared more comfortable and slept very well through the night after treatment. A myofascial examination was performed and revealed a similar examination as previously described. The treatment approach included dry needling for twenty-five minutes (Seirin 0.16mm x 15mm, and Seirin 0.14mm x 15mm). The following points were used for the same purpose as stated before: GV 14, GV 20, Bai Hui, BL 10, BL 15, BL 21, BL 23, BL 25, GB 29, BL 54, GB 30. Since she tolerated that approach, additional needles were added to the protocol: GV 24.5 as a local calming point and a PNS point to aid with her history of sneezing. LI 20 was attempted as a PNS point, but she did not tolerate this. BL 27 and BL 28 as a CNS point to improve input into the lumbosacral region. ST 36 as an ANS point to help boost the immune system and as PNS point to stimulate fibular nerve input. BL 40 as a PNS point for tibial nerve input. BL 60 as a PNS point for fibular and tibial nerve input for pelvic limb pain. Bafeng points for PNS input. LI 4 for ANS input for improved immune support. The treatment was followed up with a localized massage which she responded well to. Her myofascial restriction appeared resolved after the procedure. Gentle tail traction was performed. Diva was noted to jump up on the chair in the exam room after the treatment which was an immediate improvement for her. 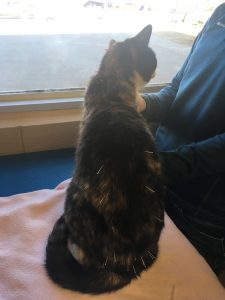 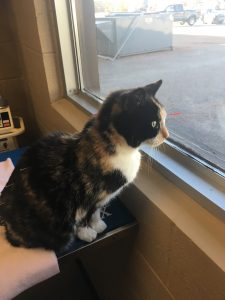 Diva demonstrated a positive outcome with each progressive treatment. This was demonstrated in her increased interaction with the family and being more affectionate. She displays improved confidence in her movement throughout the house and in jumping up on substrates. She continues to have weakness in the hind limbs, ninety degree flexion of the stifles, low tail carriage and kyphosis over her lumbar spine. Her myofascial examination demonstrated a reduction in the myofascial strain pattern extending along the lumbar spine. The temperature difference from the sixth lumbar vertebrae to the lumbosacral region resolved and is suspected to be attributed to improved blood flow to that region secondary to the neuromodulation provided by the acupuncture and related techniques utilized. Diva also should improvement in the local trigger points of the hip regions as she did not move away or sit while palpation was occurring in those regions.

A key learning experience gained from this case study was the importance of clear communication in managing expectations for owners with regards to the treatment plan and anticipated outcomes. After the four week treatment, the muscle mass and stifle flexion did not improve significantly and this was disappointing for the owner. This progressive deterioration has occurred over many years and is unlikely that can be reversed acutely. It is still believed that the treatment approach can lead to long lasting benefits. The mechanism of age-related muscle loss involves many factors such as decreased physical activity, elevated cytokine production, changes in muscle fibers and decreased protein synthesis (2). Acupuncture has been shown to decrease skeletal muscle atrophy induced in mice (3). It is believed that through early intervention with acupuncture and related techniques, the progression of sarcopenia will slow secondary to increased physical activity from improved pain control, as well as a decrease in negative cytokine production. One area of interest for future treatments on Diva, would involve the use of electrical acupuncture. Acupuncture with low frequency electrical stimulation has been shown to improve metabolic status and muscle regeneration in mice with chronic kidney disease through the up-regulation of IGF-1 signaling pathway (4). This approach can help to replicate exercise through muscle contraction. Since Diva has shown a positive response to acupuncture and related techniques employed, advancing into an electrical acupuncture approach will be utilized as an attempt to gain further benefits.

Another area of interest to pursue in Diva’s treatment is the addition of laser therapy to the protocol. At the time of this report, the clinic does have access to a laser therapy program. We are in the process of obtaining a Companion Laser Therapy Unit. Use of photobiomodulation over the lumbosacral region should help to reinforce the benefits that we have already started to see. Additionally, using laser therapy to target the elbows is likely be better tolerated than the previous acupuncture treatment in that region.