Abstract
Bruce Jenner was presented after an approximately three month history of pain and self-trauma to his tail. He had two different tail amputation surgeries and had been given gabapentin, convenia, meloxicam, and fluoxetine. He was found to be painful over his lumbar spine and sacrum. Acupuncture was implemented and he was then able to be weaned off of his oral medications and has not been showing any signs of pain.

History
Bruce Jenner is a 3yr old male neutered domestic shorthair, indoor only cat that presented for attacking his tail and causing self-harm. He was first seen by his primary care veterinarian 7/30/18 for blood being noticed from his hind end but not sure where it was coming from. His anal glands were very full that day and expressed, with no blood found. He otherwise was doing well at home with no other complaints. Approximately one month later, 8/27/18, he returned because his owner had noticed that he had caused a wound on the tip of his tail. Medical and surgical therapy was discussed at that time but declined by the owner. Two weeks later, 9/10/18, surgical amputation of the distal one inch of the tail was performed. Pre-surgical blood work was within normal limits and he was given meloxicam for pain following the procedure. The following day, 9/11/18, he caused self-harm proximal to the surgical site. Surgical glue was applied to the area. He was given an injection of Convenia, 0.8ml subcutaneously and sent with an Elizabethan collar to wear always until the tail was healed. The following day it was noticed that he was able to get past the Elizabethan collar so bitter apple was applied to the bandage and he started receiving gabapentin 50mg orally every 12 hours. He returned 9/21/18 for suture removal and it was discovered that he was still causing harm to his tail. Behavior modifying medications and the recommendation to amputate more of his tail were discussed at this time. When he returned 10/19/18 for a recheck of his tail the distal aspect of his tail was deemed non-viable and further amputation was recommended. He was found to be painful over his sacrum and lumbar spine. Chiropractic was performed for his pelvis and thoracolumbar spine. He returned 10/24/18 for another tail amputation surgery. Again, his pre-surgical blood work was within normal limits and he did well under anesthesia with an uneventful recovery. He was prescribed gabapentin at 100mg orally every 12 hours as well as fluoxetine 4mg orally every 24 hours. Acupuncture was recommended at this time and his owner was excited to try. With further questioning of the owner she does report being afraid to pet him along his back, since before he started harming his tail because he acted like it hurt him. 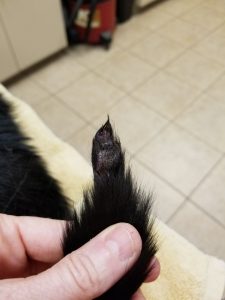 Definitive Diagnosis
Feline hyperesthesia syndrome leading to self-trauma of his tail resulting in the need for surgical amputation. 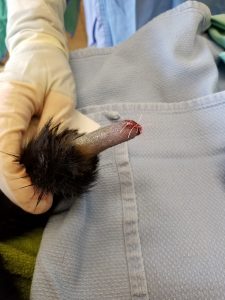 Medical Decision Making
Bruce Jenner’s first acupuncture treatment was the day following his second amputation surgery. He was anxious and just a few points were chosen that day to see how he would respond to the treatment. Yin Tang, GV 14, Bai Hui, BL 27 bilaterally, and BL 35 bilaterally were chosen. The goal was to be able to use points that would stimulate the central nervous system (CNS), the peripheral nervous system (PNS), the autonomic nervous system (ANS), and the myofascial. That was not attainable early on in the treatment as he was to sensitive and reactive to allow needling in all areas, and he was sensitive to manual therapy as well. As he became less reactive more points would be utilized as well as more manual therapy. Laser would have also been a good modality to utilize here. Future points would be based on palpation. Ideally, he would be seen weekly for treatments. He would continue with his medical management, gabapentin, fluoxetine, and the goal would be able to wean him off of these medications by maintaining his comfort with acupuncture alone. 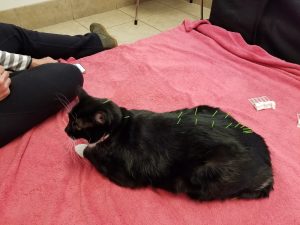 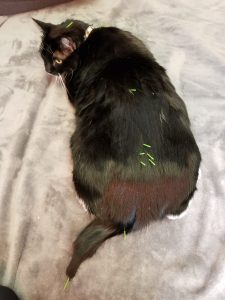 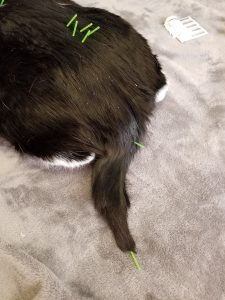 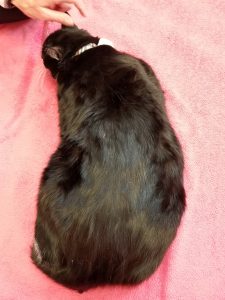 Outcomes, Insights, Discussion and References
Bruce Jenner responded well to his acupuncture sessions and his owner was very pleased with the outcome. I found it interesting that she appreciated that he was more sensitive for a few days following his third treatment but then after that he seemed to improve after each treatment. A pattern was evident with his myofascial exams each treatment which made for consistent acupuncture points throughout his sessions with heavy influence over the sacrum. His owner was very reluctant to touch him along his back and it took several treatments to convince her that she should be able to touch him without hurting him.
Bruce Jenner was an exceptional cat to work with. He was very tolerant of his acupuncture sessions and would sit still in a sphinx like body position. I was surprised at how tolerant he was of having needles placed in his tail itself.
With doing some research for this report it saddened me to find that owners are not being offered other therapies besides medications and surgery for this issue. A search on Veterinary Information Network (VIN) showed multiple discussions regarding feline hyperesthesia syndrome with only a few even mentioning acupuncture as an option.
Since I’ve worked with Bruce Jenner, I have had other cats referred to me for acupuncture for feline hyperesthesia syndrome. They have all responded favorably to the treatment and their owners have been both shocked and very pleased as to how quickly they are seeing changes at home. My most recent patient was brought in prior to him escalating to the point of self-harm. His owner brought up the signs she was seeing at home of him twitching/rippling down his back and that he was looking at his tail. Her veterinarian listened to her concerns and immediately offered a referral for acupuncture. With the first treatment she was able to pet down his back without him twitching or reacting to her touch. After just ONE treatment. Making me think that if we can get to these cats early on before they advance to causing self-trauma, that they will respond even faster to treatment. This cat has only done acupuncture, no oral medications at all. The word needs to get out so that we can get some relief for these poor cats.