Abstract
A small puppy was hospitalized for treatment of parvovirus. After a couple days of traditional inpatient medical therapy with no obvious improvement, once daily acupuncture and massage were added to his treatment protocol. The puppy clinically improved and was later discharged from the hospital.

History
A nine week old, mixed breed, male intact, 5 pound puppy named Smokie was adopted on 1/23/2018 and was taken to his primary care veterinarian for his first round of vaccinations on the same day. He was doing well in his new home for the first 3 days the owners had him. On 1/27/2018 Smokie did not eat his breakfast, and then had acute onset of vomiting and diarrhea. Smokie was taken back to the primary care veterinarian and tested positive on the Snap Parvo Test. He was then transferred directly to our 24-hour emergency center for hospitalization and supportive care.

Physical Exam, Clinical Assessments, and Treatment
On initial physical exam by the admitting veterinarian 1/27/2018, the puppy was found to be approximately 7% dehydrated with delayed skin tenting and tacky mucous membranes. He was tender on abdominal palpation. The rest of his physical exam was unremarkable. Initial bloodwork was also within normal limits.

The puppy was started on intravenous fluids with potassium supplementation, vitamin B complex, Unasyn, metronidazole, and pantoprazole with serial blood sugar and electrolyte monitoring.

On the second day, 1/28/2018, Smokie was regurgitating regularly, lethargic, and anorexic. A nasogastric (NG) feeding tube was placed and suctioned every 4 hours. The puppy was also started on a Clinicare continuous rate infusion (CRI) for enteral nutrition. Smokie continued to regurgitate so the Clinicare CRI was discontinued.

On physical exam 1/29/2018 Smokie was still very nauseous, lip-smacking, and lethargic, with a hunched posture in the back of his kennel (See Smokie Video 1). Vital signs, electrolytes, blood sugar, and heart and lungs were normal. There was hemorrhagic diarrhea on rectal exam, but he had not had a bowel movement during his entire hospital stay. Repeat abdominal radiographs were performed to rule out an obstruction or intussusception and images were consistent with ileus. Albumin was rechecked and had decreased from 2.6g/dL on presentation to 1.8g/dL. The puppy was consistently producing between 30 and 55mL of fluid, aspirated from his NG tube, every 4 hours. Clinicare CRI was restarted through the NG tube at a 1mL/hour “trickle feed” and VetStarch was added to the treatment protocol to combat the dropping proteins. The owner came to visit Smokie and after seeing his condition and lack of improvement, inquired whether humane euthanasia would be recommended. It was decided to continue hospitalization for an additional 24 hours before making that decision. The client consented to trying acupuncture.

Definitive Diagnosis
Full bloodwork was performed ruled out obvious metabolic causes for clinical signs (congenital kidney disease, portosystemic shunt). A fecal exam was negative for intestinal parasites. Serial radiographs helped to rule out a mechanical obstruction. A parvo Snap Test was positive for parvovirus. Given the age, vaccination history, clinical signs, and development of leukopenia, parvovirus with associated ileus was determined to be the definitive diagnosis.

Medical Decision Making and Discussion
The goals of Smokie’s treatment were to improve appetite, decrease abdominal pain and nausea, and stimulate gut motility. The acupuncture points selected are shown by the papers referenced below to improve all of these signs. ST 36 has been proven to help with gastrointestinal ailments and gut motility, as well as supporting the immune system and having anti-inflammatory effects. PC 6 is commonly used to treat nausea and vomiting. BL 21 is the shu point for the stomach and BL 25 is a the shu point for the large intestine. Additionally, the bladder line points selected also corresponded to tight paraspinal musculature, which may be finding due to viscerosomatic efferent pathways. These points can both soften tight muscles via trigger point therapy and balance the nervous system affecting the gut, via the thoracolumbar and midlumbar spinal nerves.
The points that were used varied slightly between treatments based on the puppy’s body position (he preferred to lay on his left hip) and location of the intravenous catheter and bandage (the intravenous catheter is replaced every 72 hours to prevent infection/vasculitis). A shorter needle would have been ideal, especially in the distal limbs as the weight of the needle prevented the needles from staying in place the entire treatment length. Abdominal massage was utilized as another proven treatment modality to help improve gut motility. Laser therapy was not utilized because the laser available is a class IV, which should be used with caution around open growth plates. Also, the puppy was kept in an isolation ward so moving any equipment that cannot be sterilized (such as the electrostimulation unit or laser) in and out of the isolation ward is discouraged. 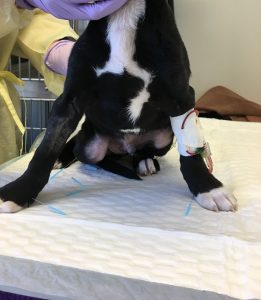 Medical Acupuncture and Related Technique-Treatment 1
On myofascial exam, skin was uniformly loose. Bilaterally, the paraspinal muscles at the caudal thorax and cranial lumbar region were tense. Smokie grunted and regurgitated on even gentle palpation of the abdominal muscles. No neurologic or other significant findings were noted.

90 minutes after his Smokie’s first acupuncture treatment, only 9mL of fluid was aspirated from the NG tube and Smokie ate a couple tablespoons of canned food on his own.

Smokie appeared clinically brighter and wagging his tail on his fourth day of hospitalization (1/30/2019). He was eating small amounts but still regurgitating regularly. NG tube production was between 20 and 33mL every 4 hours overnight. In the morning, Smokie pulled out his own NG tube and since he was eating, it was not replaced. Ondansetron was added to Smokie’s protocol. Smokie’s white blood cell count was reassessed and had dropped from 8.2 K/uL on presentation to 2.0 K/uL. 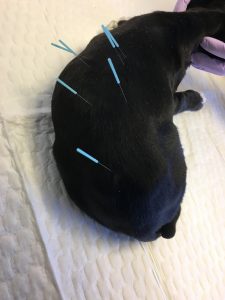 On Smokie’s fifth day in the hospital, his injectable pain medication and antibiotics were discontinued and he was transitioned to oral Clavamox. Smokie no longer showed a hunched posture and while still slightly tense along his thoracolumbar paraspinal muscles, the muscles were softer overall. 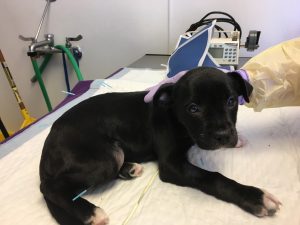 Medical Acupuncture and Related Technique-Treatment 3
Smokie’s paraspinal muscles continue to soften and only mild tension was palpated. He had his third acupuncture treatment using the same needles at the following points: Bai Hui, Bilateral BL 20, BL 21, BL 25, LI4, right PC 6, right ST 36, right LR3, right LU7. Needles were stimulated every 5 minutes. Smokie was more active today so forelimb points did not stay in long and all other needles were removed after about 15 minutes. Acupuncture was followed by abdominal massage.

Smokie had a semi-formed bowel movement 20 minutes after his treatment, continued to improve, and was discharged the next day.

Insights
I have worked as an emergency veterinarian for 10 years and have treated countless cases of parvovirus in puppies. Parvovirus can be an extremely frustrating disease to treat as many puppies become septic and succumb to the disease, or are euthanized when they do not improve after several days and their owners can no longer afford to continue aggressive treatment measures. The key to survival in these “parvo puppies” is to get them eating and drinking as quickly as possible so they can stay hydrated and tolerate oral medications at home.

This was my first time using acupuncture to treat a gastrointestinal ailment. Obviously fluid therapy is an essential part of treating parvovirus and all conventional medical management also contributed to the success of Smokie’s recovery. However, after aggressive medical management failed to make significant improvement in this puppy and euthanasia was brought up, I was racking my brain trying to think of something else I could add to stimulate GI motility and get this puppy eating. I felt silly for not thinking of acupuncture sooner. Smokie was visibly more comfortable after each treatment. He started to eat 90 minutes after completing his first treatment and was discharged after his third treatment. In the future, I will reach for my needles a lot quicker, in hopes to hasten healing and shorten hospital stays, which can literally save lives!