Abstract
Rupture of the cranial cruciate ligament is the number one cause of hind limb lameness in dogs.1 The current recommendation by most veterinarians is surgery because it is able to more rapidly stabilize the stifle and offers an earlier return of limb function compared to conservative medical management.1-2 This case study tracks a patient that underwent surgical repair of a right cranial cruciate rupture and was treated postoperatively using multimodal rehabilitation including acupuncture, laser, underwater treadmill, massage, and exercise. The patient subsequently ruptured her left cranial cruciate ligament three months post-surgery and endured a second procedure. A recent update from the owner revealed the patient now has a meniscal tear on the right stifle and will need a third surgery.

History and Physical Exam
Kona is four-year-old spayed female pit bull terrier that presented on 8/6/18 with a history of limping on the right hind limb since the night before. Upon examination, moderate toe touching lameness of the right hind limb was noted along with mild thickening of the stifle. The orthopedic exam was positive for both cranial drawer and tibial thrust. No neurological abnormalities were noted. The body condition score was graded 6/9. Three view radiographs were obtained and sent to an outside radiologist for review. The radiologist concluded there was chronic cranial cruciate instability of the right stifle with mild secondary osteoarthritis. The left stifle was normal. A complete blood count and chemistry panel was conducted in-house and showed no abnormalities.
On 8/14/18, the owner brought the patient to a board-certified surgeon. The pros and cons of extracapsular suture, tibial plateau leveling osteotomy (TPLO), and tibial tuberosity advancement were discussed. Due to financial constraints, an extracapsular suture surgery was scheduled for the next day. During surgery, the surgeon confirmed the torn cranial cruciate ligament with an intact meniscus. The patient was discharged the next morning with instructions to restrict activity for at least two months, and to pursue rehabilitation therapy. Carprofen and tramadol were dispensed to control pain and inflammation. The patient was brought back for a post-operative recheck on 9/5/2018 with the surgeon. The patient was ambulatory with a grade 2/4 right pelvic limb lameness with a good range of motion. The stifle was palpated and minor discomfort was elicited.
Four weeks after surgery (9/13/18), Kona started rehabilitation therapy. Palpation elicited discomfort on the right biceps femoris, the dorsal expaxials from T9-L4, right gluteals, and bilateral psoas muscles. Gait analysis showed intermittent toe touching lameness but the patient was otherwise weight bearing. The neurological examination was unremarkable.
On 10/2/18, the surgeon noted loosening of the lateral suture stabilizing the stifle. He recommended further restricting activity and continuing physical therapy.
Up until 11/29/18, the patient was brought to the clinic on a weekly basis for rehabilitation therapy consisting of underwater treadmill, massage, laser, exercises, and acupuncture. On 11/29/18, the owner advised the rehabilitation doctor that the patient had been skipping on her rear left leg for the past 4-5 days. An orthopedic exam revealed positive tibial thrust and cranial drawer consistent with a cranial cruciate tear of the left stifle. The surgeon recommended that the patient have a TPLO done this time due to the loosening complications with the prior extracapsular repair. On 12/5/18, the TPLO was completed on the left limb and no meniscal tear was noted.
The patient resumed rehabilitation therapy on 12/18 and received her last acupuncture treatment on 12/27/18 because of separation from the company to start clinical rotations at Midwestern University. The owner provided an update on 2/20/19 that Kona now has a torn meniscus on the right rear limb and the surgeon is recommending a TPLO and meniscus repair. Surgery to remedy the failed extracapsular repair of the right stifle has yet to be scheduled due to financial reasons.

Possible surgical failure due to loosening of the extracapsular suture and subsequent meniscal tear of the right pelvic limb.

One month after the first surgery, multimodal rehabilitation therapy was started. Hydrotherapy using an underwater treadmill was performed on a weekly basis for 8-16 minutes. The initial setting used for therapy was 0.8 miles per hour at 15 inch depth. For the final treatment on 11/1/18, the water level was lowered to 11 inches and the speed was increased to 1.0 miles per hour. Hydrotherapy is beneficial because buoyancy in the water reduces the impact and strain on recovering or painful body parts, allowing muscles to be used and strengthened during the recovery process.

The rehabilitation team also recommended at-home stretching and massage to help strengthen the muscles and simultaneously treat the myofascia. The patient received effleurage massage daily from the owner to provide somatic afferent stimulation over a larger area than what acupuncture alone can achieve. 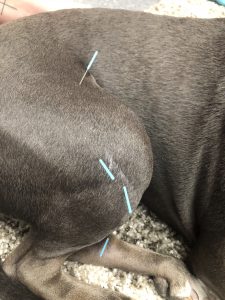 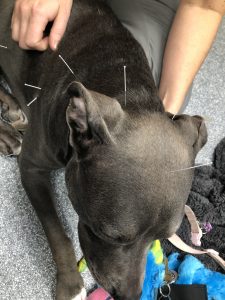 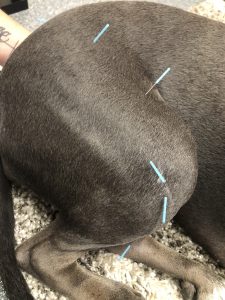 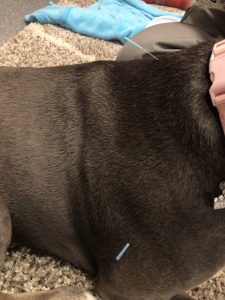 10/25/18:
Dry needling with Seirin 0.20x30mm
Physical Exam: The patient was bright, alert and responsive, but quite nervous. Pyoderma was noted on the ventral abdomen. While walking there was intermittent circumduction of the right pelvic limb with occasional unwillingness to bear weight on the right rear leg. No neurological deficits were noted. Palpation of the patient revealed taught bands on the infraspinatus and supraspinatus muscles, right gluteal atrophy, and tenderness at the level of S1/S2.
Points: ST 34, ST 36, SP 9, SP 10, HT 7, SI 11, SI 12, BL 40, BL 54, GB 29, GB 30, GV 14, GV 20, Bai Hui.

ST 34, ST 36, SP 9, SP 10, and BL 40 were chosen to address stifle pain. To address peripheral nerves and distal points, HT 7 and ST 36 were chosen. BL 54, GB 29, and GB 30 were used to address possible hip pain due to compensation from the extracapsular surgery. Because the patient was quite nervous GV 20 and HT 7 were used. Due to the pyoderma noted on physical exam, SP 10 was needled, along with GV 14, ST 36 for general immune function. Since taught bands were noted while palpating the infraspinatus and supraspinatus muscles, SI 11 and SI 12 selected.

11/14/18:
Dry needling with Carbo 0.20x25mm
Physical Exam: The patient was bright, alert and responsive, but quite nervous. The ventral abdomen was erythematous, but the pyoderma appeared to be resolving. No limping was noted, and the neurological exam was normal. Examination of the myofascia revealed tenderness of the cervical spine with normal range of motion, taught bands at SI 11 and SI 12, and tightness of the vastus lateralis.
Points: ST 36, SP 10, HT 7, SI 11, SI 12, LI 11, BL 10, BL 40, BL 54, GB 29, GB 30, GV 20, Bai Hui, local cervical points, local vastus lateralis points.

LI 11 was added to this treatment to address the cervical pain by needling peripheral nerves. BL 10 was used bilaterally along with local cervical points to further treat neck pain. Needles were also inserted locally on the right vastus lateralis to alleviate tension. All other points used in this treatment were chosen for the same reasons as treatment one.

12/27/18:
Dry needling with Carbo 0.20x25mm
Physical Exam: The patient was bright, alert and responsive, but quite nervous. There was a different owner present and seemed to be transferring nervous energy to the patient. While walking, occasional toe touching lameness was noted on the left side following her second surgery. No neurological deficits were noted. Examination of the myofascia revealed tenderness of the left pelvic limb around the surgical site, tightening of the left vastus lateralis, taught bands at SI 11 and SI 12, and pain from L5-S1.
Intended Treatment: ST 36, SP 10, HT 7, SI 11, SI 12, BL 40, BL 54, GB 29, GB 30, GV 20, Bai Hui, local vastus lateralis points. The patient was quite nervous and reacted negatively to needling the left pelvic limb. The owner became upset, so the decision was made in conjunction with Dr. Venable to change the treatment.

All points used in prior treatments were used to address the same problems. BL 11, BL 12, and BL 13 were added to the treatment to address prior cervical pain and relieve tension around the shoulders.

Cranial cruciate ligament rupture is the most common orthopedic injury in dogs, but there is no consensus as to what the best surgical treatment is in regard to return to function and pain reduction.3 One report showed that between 44-61% of dogs showed some pain a year after cranial cruciate repair, regardless of the procedure.3 It is also important to note that about half of patients that undergo surgery will rupture their other cranial cruciate due to increased load.

This case was a reminder that clients must be informed that surgical treatment for cranial cruciate rupture is not a cure and that many complications may occur.3 Some studies have demonstrated that almost two thirds of overweight dogs had favorable outcomes after 52 weeks without surgical intervention.1, 4 The authors cited weight loss and multimodal rehabilitation therapy, including acupuncture as being enough treatment in many patients.

Despite receiving weekly rehabilitation starting a month after her first surgery, Kona is facing a third procedure. This leads the author to ask if the patient would have been better off simply having rehabilitation therapy including acupuncture instead of multiple invasive surgeries. Due to still being enrolled in veterinary school, the author was not involved in any medical management other than acupuncture under the guidance of a CuraCore certified veterinarian. It seemed at times as though there were too many individuals involved in the treatment of this patient. Because of the rigorous schedule of veterinary school and having to coordinate times with everyone else, acupuncture treatments were not done as frequently as would have been preferred. The patient’s temperament may have not been ideal for acupuncture and eliminated the possibility of using electroacupuncture. Going forward, it will be beneficial not to have the owner present if they are uneasy because the animal senses the negative energy.