This case report describes an assessment of acupuncture to reduce pain following a stifle injury. While waiting for the arrival of a splint to help treat an acute cranial cruciate rupture, the dog’s owner elected to try acupuncture in order to possibly provide some pain relief and faster recovery. The treatments did appear to reduce the dog’s overall pain and provide comfort at a time when the stifle could not be supported, allowing her to utilize her brace quickly once it arrived.

Millie is a rescued, spayed 4-year old bulldog/boxer mixed breed dog. She had no previous history of illness or disease. Two weeks prior to her first acupuncture treatment, while hiking with her owner, she stumbled while moving over some uneven terrain. She became acutely toe-touching lame in her right hind leg. The primary veterinarian diagnosed a complete tear of the right cranial cruciate ligament. Millie’s owner was hesitant to do surgery on her right stifle. Millie was placed on limited exercise and oral carprofen while her owner explored other non-surgical treatment options. He ultimately decided to try fitting a brace to Millie’s right hind leg. He also requested acupuncture to try and keep Millie more comfortable while waiting for her custom brace to be manufactured.

On presentation Millie was bright, alert and responsive. She was a very protective and aggressive dog toward non-family members so the exam and all treatment sessions were conducted with her wearing a muzzle. Millie was well-muscled and moderately over-conditioned (6/9) but not excessively obese. She was toe-touching on her right hind limb and was only willing to walk a handful of steps before sitting and resting her right hind leg. Effusion was palpable around the right stifle joint. However, her right stifle joint was too painful to manipulate significantly. Since she preferred to sit on her left hip or lay on her left side so palpation of her left pelvic limb was limited. Areas of myofascial restriction were felt along Millie’s entire spine, from the cervical to the sacral regions. The infraspinatus mm and supraspinatus mm were tight bilaterally with the left slightly more so than the right. The triceps mm were also tense bilaterally. Tight bands could be felt in multiple forelimb muscles. Millie’s right quadriceps femoris mm were also tense with numerous tight bands.

I found Millie’s exam to be consistent with the diagnosis of cranial cruciate ligament tear made by the primary veterinarian.

Given that the primary veterinarian had already begun NSAID treatment and that the owner had elected to have a splint made for Millie, I felt my role was to try and reduce Millie’s pain by reducing the amount of muscle tension and myofascial restriction that she was experiencing as she tried to compensate for her injured limb.

Since she was a protective and painful dog I decided to incorporate calming points where I could. I also aimed to use points associated with anti-inflammatory activity, particularly in the right pelvic limb, when possible. 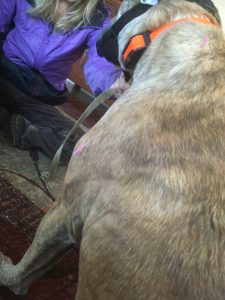 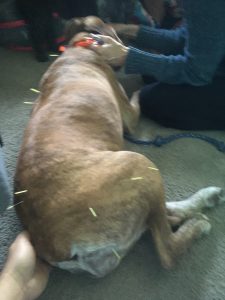 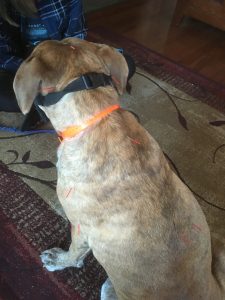 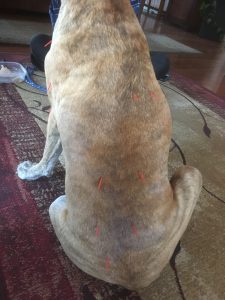 Millie was treated six times with the first two treatments spaced a day apart and the remaining treatments each spaced one week apart. The treatments lasted, on average, 30 minutes.

Each treatment began with the placing of GV20 as a means of reducing anxiety and calming Millie. Points BL 10 (right and left) and GV14 were then placed to help reduce cervical tension. Working in the cervicothoracic region to allow Millie to get accustomed to the needles before attempting to manipulate her painful right hind limb, so GB21, BL 11, SI 11 and SI 12 were often placed bilaterally. Local trigger points in the triceps mm were also needled.

Moving caudally along the spine local trigger points in the longissimus dorsi mm were placed bilaterally. These were often in the proximity of bladder points such as BL 15, BL 21 and BL 25 but did not always specifically correspond to them. BaiHui could be comfortably placed during each treatment session and was used to help reduce lumbosacral and pelvic limb pain.

During the initial two treatment sessions attempts were made to needle ST36 and ST 34 on the right side but these point were too reactive. In order to accustom Millie to needles in her right hind leg GB29 and GB30 were placed and tolerated well. In subsequent sessions ST36 and ST34 were able to be placed on the right pelvic limb. They were used to modulate stifle pain and, in the case of ST36, the inflammatory response around the right stifle. Millie did not like having her right hind limb manipulated so while attempts were made to place SP9 and SP10 to also reduce stifle pain, they were often not successfully inserted. Local trigger points in the quadriceps femoris mm were needled when tight bands were palpated during the preliminary exam.

Five minutes after completion of her first acupuncture treatment, Millie lay down and fell asleep for two hours. That was the longest her owner had seen her sleep since her accident. This, I believe, is a testament not only to the efficacy of the acupuncture to relieve pain but also to the amount of pain Millie was experiencing. The stifle injury did not change significantly during the course of treatments but the effusion in the stifle joint did begin to resolve and Millie was beginning to load her right hind leg more after the final treatment, although she was still toe-touching lame. I do feel the acupuncture helped to keep her right stifle joint comfortable enough that when the brace was finally placed she was capable and willing to walk with a much more normal gait almost immediately. In an update in early March 2019, 2 months after Millie’s last treatment, Millie’s owner reports that she is walking with normal weight bearing on her right hind leg when wearing the brace and nearly normal weight bearing when the brace is removed.

Although Millie continued to have to wear a muzzle during treatment and would bark and snap at me when I first came to the door, once needle placement began she relaxed visibly and no further growling, snapping or other aggressive behaviors were seen for the duration of the treatment session. In fact, by the end of each session Millie was often sitting in my lap or relaxing by my side. I do believe that these acupuncture sessions did reduce Millie’s pain and stress significantly. Given the role that pain and stress are suspected in playing during wound healing, I would like to believe, although I cannot prove it, that these sessions may have helped improve the overall healing of her injury.

I think Millie truly enjoyed her acupuncture treatments. This case was a good reminder for me of just how much pain an animal can tolerate and still be mobile and also how much benefit relief of that pain can give an animal particularly during the healing phase of an injury.