Abstract
Gabe is a seven year old castrated male Greyhound who presented for licking and later biting his tail and a hunched stance in the pelvic limbs. Following examination he was neurolocalized to the L7-S1 spinal column. Differential diagnoses for his clinical signs included: lumbosacral disease, neoplasia, diskospondylitis and meningomyelitis. Acupuncture, photobiomodulation and massage therapy were instituted; improvements in gait and pain were observed after 5 treatments.

History and Chief Complaint
Gable Dougie Boy (Gabe) is a seven year old, 32 kilogram, castrated male greyhound who presented on February 8, 2019 with a history of licking his tail and hunched stance in the pelvic limbs. Prior to this incident he had been a healthy blood donor for the university. He was recently adopted by the current owner. A physical exam at the time revealed a right pelvic limb lameness and pain on extension of the right hip and on lumbosacral palpation. He was also noted to be scuffing the claws of the right pelvic limb. He was neurolocalized to L7-S1 spinal cord segments with a suspected right root signature. Radiographs made of his lumbar spine revealed spondylosis deformans at the lumbosacral space. Bloodwork was performed which showed no significant findings. On exam Gabe was also noted to have a wound was on his tail. The wound was clipped and cleaned and Gabe was sent home on carprofen (75 mg orally every 12 hours) and gabapentin (300 mg orally every 8-12 hours) in addition to small room rest and leashed walks for treatment of his lumbosacral signs.

On March 4, 2019 Gabe presented to the neurology service to follow-up on his L7-S1 signs and suspected right pelvic limb root signature. At this point Gabe was no longer on carprofen and was on 200 mg gabapentin every 12 hours. A complete exam was performed which revealed no obvious ataxia or weakness. Nail wear was present on the claws of the right pelvic limb, but no obvious lameness was observed. He was not overtly painful on tail raise or LS palpation via rectal examination. He was given instructions to taper off of gabapentin and slowly be reintroduced to normal off leash activity. He was also given a pulsed electromagnetic field (PEMF) unit to utilize at home every 6-8 hours. The owner tried the unit for 5-6 treatments but discontinued its used as she saw no improvement in his condition. 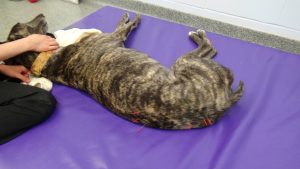 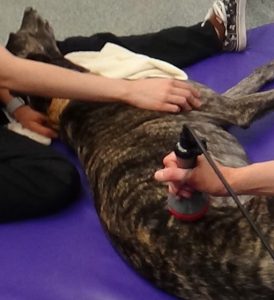 On May 9, 2019 Gabe re-presented for recheck of his lumbosacral spinal cord signs. The owner noted that he is now back to normal activity and that he has good and bad days. She said that he is very active, twirling in the air and jumping up to run and play. A persistent lameness of the right pelvic limb was also observed at home. She also noted that some times throughout the day he is stiffer in his pelvic limbs and would stand and walk in a hunched position. He was no longer on any medications at the time.

Physical Examination and Clinical Assessment and Problem List
A physical, neurologic and myofascial examination were performed at the May visit. There were no significant findings on physical exam other hunched posture and a healed abrasion at the distal tail. Neurologic exam revealed no obvious ataxia, but a right pelvic limb weight-bearing lameness was present. On gait analysis he had a mild monoparesis of this right pelvic limb and would shuffle his pelvic limbs when walking. He also stood and walked with a hunched posture. Proprioception and reflexes were normal in all limbs. Evidence of nail wear was present on his right claws. A complete myofascial exam was performed; no obvious taut bands were palpated but he was slightly tender in this mid lumbar palpation. The main problems are paresis, more so noted in the right as compared to left pelvic limb and hunched associated with L7-S1 spinal cord signs and hunched posture.

Putative/Definitive Diagnoses for Top Two Problems
The most likely differential diagnosis given the patient’s history, physical, myofascial and neurologic exams in addition to the radiographic findings, is a lumbosacral disease causing a root signature on the right side.

Medical Decision Making
A treatment plan was developed for the patient. This plan included photobiomodulation of the lumbosacral spine and hips in addition to acupuncture therapy. The photobiomodulation was selected to help reduce inflammation and also for pain relief. Acupuncture points selected were those in the Bladder (BL), Governor Vessel (GV), Stomach (ST) and Gallbladder (GB) channels. The Bladder points were selected to treat the spinal cord in conjunction to local back muscles (lumbar and sacral spine), hips and nerve roots. Bai Hui was selected to treat lumbosacral pain and to calm the patient. GV-4 was selected to treat lumbar and pelvic limb pain, GV-14 and ST-36 were used for the autonomic nervous system and immunomodulation. Points were also selected to target the sciatic nerve or its branches peripherally (ST-36, BL-54, BL-60, and GB-30). GB-29 was selected to complete the hip triad as likely Gabe was suffering from some degree of hip instability or pain related to his suspected lumbosacral spinal cord disease. 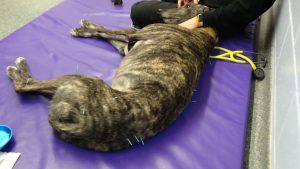 Outcome, Insights, Discussion and References
The patient did very well with all treatments. There were no adverse reactions observed to therapy other than irritation experienced when both the red Seirin (0.16) and blue Seirin (0.20) acupuncture needles were placed at the BL-60 point. Being a Greyhound this patient has very thin skin, particularly at the location of this point. This thin skin may be part of his irritation when needles were placed in this location. An adjustment was made and this point was not placed at his fifth treatment. Gabe tolerated photobiomodulation and the rest of his acupuncture point placement very well. Of interest was the lack of ease of needle placement associated with the BL-23 and GV-4 points. There seemed to be more de qi experienced along dorsal midline at the cranial to mid lumbar spine in this patient. The needles were more difficult to place and also would be more apt to “pull” into the skin and associated musculature following placement and throughout the treatment period while other needles remained static and did not waver. Though myofascial trigger points were not palpated along his lumbar musculature the reaction of the needles during placement would indicate myofascial tension in this area. When comparing gait analysis and clinical exam findings prior to and following treatments and also between treatments one and five, the patient seemed much more calm, relaxed but also less lame and paretic. Incorporation of more points stimulating the peripheral nervous system seemed to improve his function. Going forward with this patient, the goal will be to incorporate electroacupuncture into the patient’s therapy routine and to begin to reduce the frequency of his acupuncture and photobiomodulation therapies. The ultimate goal being to determine what frequency of the combination therapy allows Gabe the most comfort and clinical improvement, while continuing to be time and monetarily feasible for the owner.
I learned several things from this case including: what de qi feels like on a clinical patient and how to treat a dog with lumbosacral disease with a combination of both traditional medicinal therapies but also physical rehabilitation techniques and acupuncture therapy. Multiple articles have been published on the utility of acupuncture as a therapy for spinal cord disease in the dog.1-4 The next step will be continue to add to this growing field of acupuncture research and create a controlled, prospective study that explores the safety, use and efficacy of acupuncture and electroacupuncture in the treatment of lumbosacral disease. Studies exploring acupuncture as in combination with traditional therapies could also be explored.