Cognitive Dysfunction and IVDD in a 14-Year-Old Husky

Abstract:
Emmy Lou has an extensive medical history, including intervertebral disc disease, organ dysfunction, and neoplasia. She was treated with acupuncture, massage, and electroacupuncture (EAP) with goals of improving mobility, sleep, and appetite. Emmy was treated with a focus on myofascial pain as well as balancing sympathetic and parasympathetic tone. With each subsequent treatment, her owner reported improvement in treatment goals. Acupuncture will be continued on this patient to maintain quality of life for as long as possible in the face of two distinct cancer diagnoses.

History and Presentation:
Emmy Lou is a 14 year-old female spayed Mini-Husky. His owners presenting concerns are Emmy’s cognitive decline, poor sleeping at night, decreased appetite and overall comfort level; especially in her back. Emmy has had back pain since October 2016, noticed first with difficulty going up stairs. Radiographs in February 2019 showed osteophytosis in the shoulders, as well as thoracic spondylosis deformans. She has not had computed tomography or magnetic resonance imaging for further assessment of her spinal cord. Laura also notes that Emmy has an increasingly hard time jumping in and out of the car and seems generally stiff.
Emmy has an extensive medical history, including left nephrectomy in November 2014, cholecystectomy in December 2017, recurrent multi-drug resistant methicillin resistant Staphylococcus pseudointermedius urinary tract infection (currently controlled), and protein losing nephropathy (PLN) since April 2019. She is presently taking enalapril and chronic gabapentin. At the time of initial acupuncture assessment, Emmy was slightly sedated with trazadone because she was concurrently undergoing diagnostic testing for coughing, elevated liver enzymes, and elevated total calcium.
Following Emmy’s initial acupuncture assessment and treatment, she was diagnosed with hepatic and adrenal tumors that Laura elected not pursue surgically. Following Emmy’s third acupuncture treatment, Emmy was diagnosed with lymphoma, which is currently treated by the staff oncologist: utilizing a cyclophosphamide, doxorubicin hydrochloride, vincristine sulfate, and prednisone protocol (CHOP).

Physical Examination and Clinical Assessments:
Gait assessment of Emmy showed that she has lordosis in the thoracolumbar region, with kyphosis over the lumbosacral region. Her back is lacking in lateral movement, she doesn’t fully flex at her hip joints, and swings her hips side to side to help advance her feet. Cervical active range of motion was limited dorsally, but good in both lateral directions. There was a notable shortening of the fur over the cranial trapezius where her harness rubs, as well as a change of direction in the hair coat over the caudal trapezius and latissimus dorsi, where it was very warm on palpation. Emmy was very nervous about palpation during her first treatment, but allowed more thorough palpation with subsequent evaluations.
Myofascial examination revealed tight bands in bilateral trapezius muscles, tight painful iliocostalis lumborum muscles, worse on the right side, with associated warmth and discomfort.
Emmy does not have any conscious proprioception deficits, and was hesitant to lay down for evaluation of crossed extensor examination or myotatic reflexes. Pupils were equal in size with normal direct and consensual pupillary light responses, and facial sensation was normal.

Putative Diagnoses:
1) Senior Cognitive Dysfunction or Pain. Emmy does not have any other symptoms of neurologic dysfunction, and has lived in a consistent home very highly attuned to her needs for many years. Blood pressure results have been consistently normal, and labs have not been indicative of Cushing’s disease.
2) Multifocal Intervertebral Disc Disease with compensatory trigger points and tight bands. Emmy’s symptoms have been slowly progressive as she ages, radiographs have ruled out congenital abnormalities.

Medical Decision Making:
Laser therapy was available, but not recommended due to the concern for exacerbation of neoplasia. Electronic stimulation was not initially available, but was added for the fourth treatment. Emmy tolerated massage at varying levels, based on the day, length of acupuncture treatment, and how long it took her to finish her frozen baby food.

Initial treatment with dry needling was conservative in both number of sites needled, as well as type of needle used. As therapy progressed and Emmy increased tolerance to treatment, the number of needles were increased, needles selected for increased needle grab (de qi), and then EAP was added. Acupuncture points were chosen based on myofascial palpation of trigger points and tight bands locally, and distally based on shared innervation and autonomic regulation. Additional consideration was given, as tolerated, to shu/mu points for renal and gallbladder innervation.

Medical Acupuncture and Related Treatment Techniques:
Priority was given to needling acupuncture points that had active trigger points, or had overlap between multiple problems. Points affecting the central nervous system (CNS) included points along the Governor Vessel and Bladder Line. The peripheral nervous system was accessed via SP6 and BL40, as well as BL54 and GB30, for access to L7 spinal segment via the tibial and sciatic nerves, respectively. GB29 was chosen for effect at L6 spinal segment via the cranial gluteal nerve. The autonomic nervous system was stimulated using ST36, LI4, HT7, and SP6. BL23, GV4, and BL52 also benefit renal function, while BL18 and BL19 benefit gallbladder function. Huatojiaji benefits the dorsal primary ramus as well as local spinalis muscles supporting the spine. Trigger points were treated as noted based on palpation. 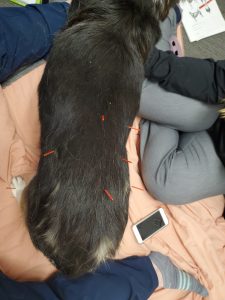 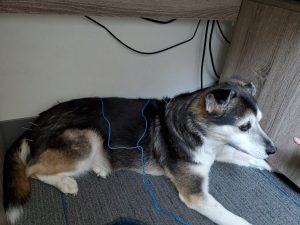 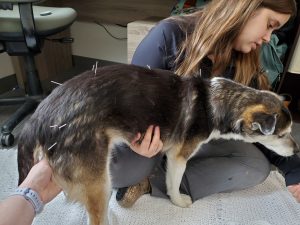 Outcome:
With each treatment, Laura reported that Emmy was improving. After the first treatment, Emmy was sleeping and eating better, and even jumped on the bed on her own. By the time of the third visit, Emmy was eating so well that Laura didn’t even have to coax her, sleeping well throughout the night without interruption, and getting in and out of the car much better. There was a break of several weeks between the third and fourth treatments, but at the time of the fourth treatment, Emmy was still sleeping better and eating better, but jumping in the car a bit less. Following her fourth treatment, which included electronic stimulation for the first time, Laura reported Emmy was doing great and feeling comfortable overall.

Comparative myofascial examination showed softening of trigger points both on the first day of treatment and over time. Initially, the clinician couldn’t even fit a finger-width dorsally in the intrascapular space, but on the final treatment they were separated by nearly two finger-widths. Skin became more freely movable over time, with less warmth palpable in the most active areas. Follow-up gait evaluation showed lessening of lordosis and kyphosis, and less swinging of her hips to avoid lateral movement in the lumbar spine.

Discussion:
Subject results of this treatment series were consistent with previously reported studies regarding acupuncture (both dry needling and EAP) effects on pain, sleep and relaxation, appetite, and quality of life. The author was impressed to see effects take place so quickly in a real life setting. Future treatments will be aimed at adding onto EAP protocol for bilateral stimulation, as well as mixed frequency mode, to increase analgesic effect as well as stimulation of endogenous endorphins, serotonin, and dopamine. Acupuncture proved to be a safe and well-tolerated treatment modality for a patient that required careful consideration of pharmaceutical use due to extensive underlying conditions.

Further exploration would focus on in-depth palpation of pelvic limbs, notably the coxofemoral joint, gluteal muscles, as well as evaluation of pelvic neurologic status. Additionally, palpation of the Bladder Line and Gallbladder Line, as they relate to the sacral and sciatic nerves, for trigger points and deficits would be revealing. Additional treatments to consider would be points along those lines, and adding e-stim as able.