IVDD in a 11-Year-Old Boston Terrier

ABSTRACT
Yoda is 11 years old male Boston Terrier diagnosed in February 2019 with a disk disease located between T3-L3. He presented on October 22nd 2019 for his first acupuncture appointment with hind limbs ataxia, delayed conscious placement (CPs) and intermittent fecal incontinence. Yoda pursed a total of 5 acupuncture treatments along with laser therapy between October and November 2019, then continue a regiment of once a week treatment. After three treatments, he became more stable on his hind limbs and was able to walk without hurting his toes. However, between the fourth and fifth treatments, Yoda hurt himself while playing outside and the neurologic deficits resumed. Even if the neurologic deficits remained stable after this accident, owners continue acupuncture once a week to alleviate Yoda’s pain.

HISTORY AND CHIEF COMPLAINTS
Yoda is a 11 years old male Boston Terrier. He was first diagnosed with a discal hernia located between T3-L3 in February 2019 by a specialized surgeon in a reference center. Back then he was paretic and ataxic on both hind limbs, worst on the left. He was able to urinate normally but had intermittent fecal incontinence. Owners decided not to pursue in surgery and Yoda was treated with gabapentin, tramadol and prednisone, with small improvement. He went off his medication during the summer and began physiotherapy exercises including swimming, passive range of motion and had a total of 10 laser treatments with a class IV K-laser unit. No other treatment or medication was attempted between August and October 2019. He was first presented for acupuncture on October 22nd 2019. Owners have no other medical concern with Yoda.

PHYSICAL EXAMINATION AND CLINICAL ASSESSMENTS
Upon examination on October 22nd, Yoda is bright, alert and responsive. His body score is 5/9 and auscultation and abdominal palpation are normal. He presents a grade 2 medial patellar luxation on the right hind limb, bilateral nuclear sclerosis, symmetric testis and an hypertrophic prostate on anal digital palpation. His neurologic exam demonstrates delayed CPs on both hind limbs, worst on the left, rear limbs ataxia and delayed withdrawal reflex on the left rear. On myofascial exam, Yoda presents bilateral taut bands on infra and supraspinatus muscles as well as brachiocephalic muscles. Palpation of the back elicits thoracolumbar and lumbosacral pain and tenderness. A coat change is visible in the thoracolumbar area. The neck moves well in all directions.

PUTATIVE DIAGNOSIS
The most plausible diagnosis is intervertebral disc disease. It seems less likely that Yoda is suffering from an infectious/inflammatory or endocrine disease as he remained afebrile and there is no other systemic sign. As a neoplastic condition cannot completely be ruled out, the condition did not progress over the past year, which makes it less likely.

MEDICAL DECISION MAKING
As Yoda presents with neurologic deficits in both hind limbs, his acupuncture treatment was aimed to stimulate the spinal nerve branches of the sciatic and femoral nerves. In this manner, points along the Bladder (BL) and Governor Vessel (GV) channels were used. Yoda also presents with fecal incontinence, so the second target of the treatment was to alleviate the pain in the back and help fecal function. As so, BL 27 was used as the back shu point for large intestine along with autonomic points such as Stomach (ST)36, BL 40 and Spleen (SP) 6. Finally, Yoda presents with myofascial tension along the neck and scapulas, which leads to point selection based on trigger points findings. 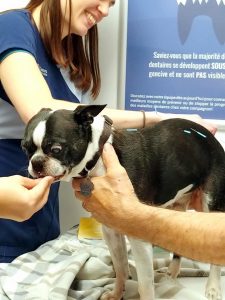 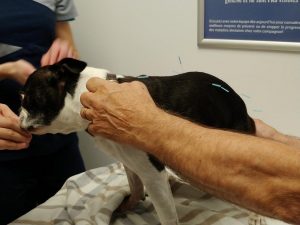 THIRD TREATMENT 10/28/2019
Yoda showed more tension in triceps/deltoids than the last time, less tension in the back and is more reactive to needling. No change in neu-rologic exam. 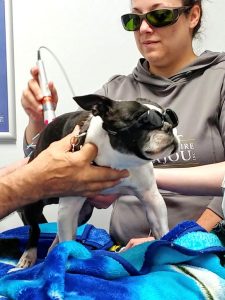 FIFTH TREATMENT 11/08/2019
Yoda presented to his fifth treatment with im-portant tenderness in the back and shoulders, definitively worst than previous exam. Ataxia is worst than the previous exam. E-STIM was not elected because of his sensibility.

All acupuncture treatments were followed by laser therapy on thoracolumbar region and along both hind limbs with the K-Laser Unit, class IV, 826J applied on each area for 1:58 minutes.

OUTCOMES
Yoda demonstrates a great improvement within the first three treatments. He was able to walk without hurting his toes and was more stable on his hind limbs at rest. His left rear withdrawal reflex improved, but CPs were still delayed in both hind limbs. However, after the fourth treatment, Yoda hurt himself while playing outside. He presented to his fifth treatment with a lot more tension in the back, shoulders and neck than in the previous session and the neurologic deficits resumed. After this episode, we were not able to reach the same level of neurologic improvement with acu-puncture, so the ataxia and fecal incontinence persist. Although, owners found Yoda more playful and more stable on his hind limbs at rest as sessions went on and decided to continue with a regi-ment of once a week treatment to alleviate his pain.

DISCUSSION
As stated by the owners after the third treatment, acupuncture was the first of all treatments at-tempted that really made a difference in Yoda’s neurologic function. That corroborates the fact that even dogs with chronic clinical signs that were non responsive to previously administered medica-tion had improvement after electroacupuncture and standard medical treatment. This could be, in part, explained by the fact that acupuncture reduces the electrical resistance and enhances electrical activity of injured tissues. Therefore, acupuncture promotes healing and axonal regrowth. Howev-er, the fact that neurologic deficits resumed after Yoda’s fall demonstrates the fragility of those patients and the necessity for long term management. Electro-acupuncture was used only once be-cause of the reactivity of the patient, and at low frequency (2Hz). However, electroacupuncture at low frequencies produces endorphin release by the central nervous system whose effect can be blocked by naloxone, while high frequency electroacupuncture causes release of dynorphins . It would have been great, though, to perform electroacupuncture at 100Hz to see if the neuroprotec-tive effect of dynorphins would have cause more neurologic improvement. Yoda’s case is a great demonstration of how acupuncture can help alleviate the pain associated with intervertebral disk disease but also enlighten the importance of having realistic expectations when facing a patient with a year long history of neurologic impairment. The latter should be discussed well with clients pre-senting in veterinary clinic for acupuncture and alternative medicine.