Abstract:
A middle-aged gelding with chronic (>one year) mild hind and front limb gait asymmetry was treated with a combination of electroacupuncture, acupuncture, and laser on four separate occasions over one month. A noticeable improvement in gait quality was noted following the third treatment and a change in demeanor was reported by caretakers following the second, third, and fourth treatments.

History and Presentation:
The 14-year-old warmblood gelding named “Berkley”, was examined on December 10, 2019 for a re-evaluation of an ongoing fore and hindlimb gait asymmetry. Berkeley had previously been diagnosed with mild bilateral stifle instability, a left hind lateral suspensory branch desmitis, mild left forelimb pastern and coffin joint degenerative joint disease, and moderate left and right carpal degenerative joint disease.
The horse was treated with shockwave therapy multiple times for the left hind lateral distal suspensory desmitis, but continued to have an asymmetric hind and fore limb gait despite improvement of the lesion on ultrasound and resolution of the original clinical signs (heat, pain on palpation, and a decreased ability to fully perform his required work). An intensive rehabilitation-based exercise protocol had been prescribed and followed throughout his convalescence to attempt to build hind end musculature to stabilize the stifles and prevent fatigue related suspensory strain.

Physical Examination/ Clinical Assessments:
First General Physical Exam (10/12/2019)
The ongoing asymmetry of this gelding’s hind end could be described as a hyperextension of the left hind fetlock at the weight bearing phase of the trot and an intermittent short stride of the right hind limb at the trot. Proximal flexion tests of the left and right hind limbs resulted in a shortened stride for approximately 15m post flexion at the trot for each limb. Distal hindlimb flexion tests resulted in a slightly longer abnormal gait for the left hind than the right hind. The front-end asymmetry was only visible for the first couple of circles on the lunge line traveling in a counter- clockwise direction. Proximal flexion tests of the front limbs were both positive with the left fore showing a prolonged shortened stride post flexion than the right.
Myofascial Palpation Evaluation (10/12/2019) before first session:
Diagnostic Acupuncture Exam “DAPE” (specific reactive points):
Berkeley was reactive to even light touch over ST 10 on the right side and LI 18 on the right side.
Myofascial Exam:
There was marked myofascial restriction palpable over the cranial and caudal gluteal muscles on the left side. A decreased range of motion of the sacroiliac joint and lumbosacral region was noted on the right and left side. Muscle hypertonicity was palpable over the left and right lumbar epaxial musculature but was more pronounced on the left side. A trigger point was discovered immediately cranial to BL 27 on the left side.
Balance:
Feet were replaced evenly and in a normal position.
Cervical Mobility:
Lateral flexion of the second and third cervical vertebrae in both directions was difficult and elicited resentment.
Withers and Scapular Mobility:
No abnormalities noted in these regions.
Shoulder (internal/external rotation):
No abnormalities noted, motion was even on both limbs.
Front limb stretch with neck lowering:
Berkley was able to easily and equally stretch his head towards his front fetlocks when they were held above the ground in front of him.
Joint palpation/Range of Motion:
Both carpi had a decreased range of motion, with the left being more compromised than the right. The left accessory carpal bone had limited motion in a lateral-medial/medial-lateral plane. Moderate intra-articular stifle effusion was palpable on the right, and mild intra-articular stifle effusion was palpable on the left.
Reactivity of paraspinal muscles:
Stimulation of his epaxial musculature from withers to croup elicited a hyperreactive response on the left side, but a normal response on the right.
Lumbosacral spinal mobility:
Motion palpation of the lumbosacral area was mildly resented and decreased bilaterally.
Sacroiliac Mobility and hindlimb circles:
Left side sacroiliac mobility was decreased and circles on this side were more challenging to keep round instead of a diamond shape.

Definitive/Putative Diagnoses:
1. Mild left hindlimb lameness
Lameness localization with nerve bocks and flexion tests followed by ultrasound exam of the distal suspensory branch and stifle radiographs identified two causes of the hindlimb gait deficit: mild degenerative joint disease likely secondary to a noted mild stifle instability along with a mild chronic suspensory branch desmitis. The conformation of the gelding predisposed him to both hind limb diagnoses, along with his history of schooling and showing at third and fourth level dressage. A normal ACTH result decreased the likelihood of PPID playing a role. The unilaterality of the suspensory lesion does not support a diagnosis of progressive suspensory desmitis, and the history of an acute lameness that responded well to shockwave therapy and following a rehabilitation and return to work plan supported a traumatic lesion of the suspensory. It is hypothesized that the suspensory desmitis may have been from overusing the left hind due to right stifle soreness.

Medical Decision Making:
Due to the chronic nature of this gelding’s gait deficits, the goal was to attempt to more fully normalize his gait to achieve a higher level of performance using acupuncture and laser therapy along with his currently prescribed rehabilitation plan. The show schedule planned for the following year made other treatment options such as intra-articular and systemic anti-inflammatory medications difficult.
The initial four treatments were planned to evaluate response and use this information to develop a plan for the 2020 show and clinic season. The favourable response immediately post treatment has led the owner to plan on using acupuncture and laser both for gait improvement but also for the calming effect noted. The once a week schedule used so far worked well for the horse and was financially feasible for the owner, although response suggests that these grouped treatments may not need to be ongoing at that rate and may be decreased to a less frequent basis. 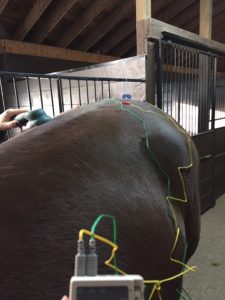 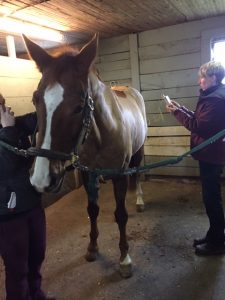 Medical Acupuncture and Photobiomodulation Techniques Used:
December 10, 2019:
Central Nervous System: LI 16 (cervicothoracic spinal nerves) were placed first to gauge the horse’s reaction to needle placement, and as a local point for the neck stiffness and discomfort. Needles were inserted at BL 23 (thoracolumbar spinal nn), BL 26 (caudal lumbar spinal nn), and BL 27 (S1 spinal n) bilaterally as local points for the lumbar epaxial muscle splinting as well as for their effects on cranial gluteal musculature.
Peripheral Nervous System: LI 11 was placed for a distal point for cervical involvement and for immune modulating effects (also ANS point). BL 40 (tibial nerve) was needled bilaterally along with ST 36 (fibular nerve) to neuromodulate the stifle.
Autonomic Nervous System: GV 14 (cervicothoracic spinal nn, also a CNS point) was used for local cervical pain and parasympathetic stimulation. Bai Hui was used for the lumbosacral dysfunction but also to stimulate nerves supplying muscles supporting the stifles. ST 36 (fibular nerve) was chosen for both its PNS and ANS properties.
Myofascial Dysfunction: GB 21 (spinal accessory nerve) was placed to address myofascial tension in the lower cervical area. The most notable areas of myofascial dysfunction were overlapped by the CNS points BL 23, BL 26, and BL 27 that were also used for their CNS effects.

Outcomes, Insights, Discussions and References:
The accompanying videos demonstrate the improvement in Berkley’s gait from December 10, 2019 to January 9, 2020. The horse did not receive any other treatment or medication during this period, and his workload has remained consistent throughout the past few months. The multifaceted nature of this horse’s gait deficits coupled with his show schedule that precludes the use of ongoing medication to mitigate those deficits prompted the owner to consider acupuncture to improve his gait. The owner is excited to have this modality to use on an ongoing basis to provide comfort and allow her to carefully maintain and promote musculature to support his stifles and prevent fatigue related fetlock hyperextension. She appreciates the necessity of this to maximize the horse’s potential as he continues to move up the levels of dressage. The idea of using acupuncture to eliminate equine lameness is not new. Studies looking at the use of acupuncture to improve equine lameness are mixed in their results. A controlled clinical trial performed in 1989 (Steiss, et al. 1989) showed no significant differences between control horses and those treated with acupuncture. A study performed in six horses with experimentally induced pain from a Merkens’ method -based shoe that applied pressure to the sole of the horses in the trial was used to cause lameness that affected stride length and character. Acupuncture was found to mitigate but not eliminate the effects of the shoe to a statistically significant degree (Huisheng Xie, Ott, E.A., Colahan, P 2001). More recently “A pilot study of the effects of acupuncture treatment on objective and subjective gait parameters in horses” was performed (Dunkel et al 2017). It concluded that acupuncture was able to effect a positive change in horse gaits in a measurable manner. The study size in all three of these experiments was less than or equal to ten horses and may be responsible for the varying outcomes along with the fact that lameness in many cases may be affected by many other variables such as conformation, other sources and causes of pain, and the possible variability of the acupuncture procedure itself. More work needs to be done to help quantify the case selection for acupuncture in the field of equine sports medicine but positive case results such as this one build confidence in both the horse owner and the veterinarian applying the technique.