Abstract: Stanley, a 17-year-old neutered male Dachshund, was presented for acute onset of pelvic limb paralysis after being attacked by a deer. Given Stanley’s age, his owners elected to pursue conservative management, including acupuncture, class IV laser therapy, and medical pain management. Stanley showed improvement rapidly and regained use of his pelvic limbs after ~10 days and is now happily back at home.

History of Present Illness and Chief Complaint(s): Stanley is a 17-year-old neutered male Dachshund who was presented for acute onset of pelvic limb paralysis. Stanley had a traumatic encounter with a deer while spending time in the backyard at night. It was very dark outside and Stanley’s owners did not see the incident. Stanley was dragging his pelvic limbs and had large lacerations. Stanley’s owner, a veterinarian, brought Stanley into the hospital immediately for laceration repair and hospitalization. Stanley has no prior history of trauma. Stanley has been blind and deaf for about 4 years and his owners report a slowly progressive cognitive decline. Stanley has no other significant medical history. On a typical day, Stanley spends most of his time taking naps at home and occasionally spends time outside in the backyard. 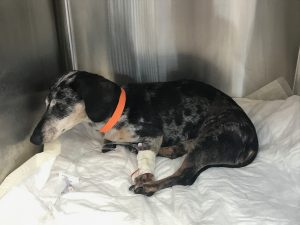 Putative/Definitive Diagnoses:
Pelvic Limb Paraplegia: T3-L3 Myelopathy – degenerative disk disease (IVDD).
Stanley’s signalment raises suspicion for Hansen Type I IVDD, a condition commonly seen in Chondrodystrophic breeds. However, Type I IVDD patients most often experience disc herniation at a much younger age (peak incidence at 3-6 years old). Given Stanley’s old age, it increases my suspicion that he has Hansen Type II IVDD, which tends to occur late in life. It is likely that Stanley’s underlying IVDD predisposed him to disc herniation secondary to a traumatic force to the spinal cord (deer attack). Spinal radiographs showed no evidence of fractures, vertebral subluxation, or intervertebral disc space collapse. We cannot rule out fibrocartilaginous embolism, but consider it less likely given Stanley’s history and signalment.

Neck Pain and Decreased Range of Motion: Myofascial trigger point pathology.
Given the presumed diagnosis of T3-L3 Myelopathy due to IVDD, it would be expected to have myofascial trigger point pathology secondary to compensatory mechanisms. As I did not examine Stanley prior to this traumatic event, it is difficult to know how much of his neck pain is due to his trauma vs. secondary to a chronic process. Evaluating Stanley’s response to treatment may allow us to narrow our differentials.

Medical Decision Making:
I elected to continue oral meloxicam for its analgesic and anti-inflammatory effects. Acupuncture needling treatments were added to Stanley’s treatment protocol to provide analgesia, anti-inflammatory effects, autonomic neuromodulation, and to strengthen neurologic connections. Acupuncture treatments were selected to include spinal cord segments proximal and distal to the affected region for analgesia and to strengthen communications, distal pelvic limb points to help communication between the peripheral and central nervous system, and autonomic points to help reduce agitation and promote autonomic homeostasis. Treatments were performed every 5 days for the first 3 treatments, then weekly thereafter. Class IV cold laser therapy was also performed during acupuncture treatments to help blood flow and to reduce inflammation in the affected regions. 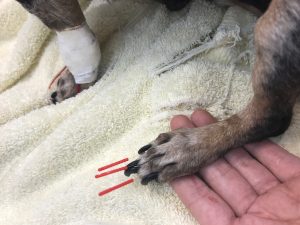 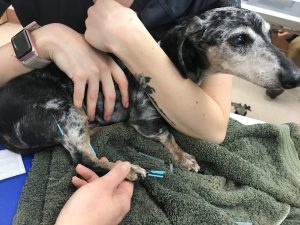 Medical Acupuncture and Related Techniques Used:
Central points: GV-14 was selected for its local effects on neck and pack pain and for autonomic neuromodulation. BL-10 was selected to address cervical pain and tension. Additional bladder points were selected to provide analgesia, to address spinal cord wind-up, and to reduce inflammation. For my first treatment, Stanley was extremely sensitive in the region of L1-L2 so I performed acupuncture at points on the inner and outer BL lines proximal (BL 19-21, 43-45) and distal (BL 24-25) to the segment. At subsequent treatments, I was able to incorporate BL23/47 and BL22/46.

Autonomic points: Bai Hui at the lumbosacral junction was selected for its autonomic effects and regional neuromodulation. ST-36 (discussed in peripheral points) is also a great point for its parasympathomimetic effects, related to its association to the NTS (nucleus tractus solitarius), to reduce emotional stress and anxiety. GV-20 was selected for its autonomic neuromodulatory effects to reduce agitation.

Needle Selection: Stanley was tolerant to placement of the smaller-diameter red (0.16x30mm) Sarin needles, but was very sensitive to placement of blue (0.20x30mm) Sarin needles. Therefore, smaller diameter needles were used for most of the acupuncture points. The larger diameter needles were used for Bai Hui, as Stanley tolerated that point well, and eventually for distal limp points.

Outcomes, Insights, Discussion and References:
Stanley seemed less sensitive in the thoracolumbar spinal cord region after his first acupuncture and laser treatments. Stanley was much less reactive upon placement of acupuncture needles for his second treatment and I was able to needle the affected spinal cord segments as well as place larger-diameter needles at distal pelvic limb points. Hospital staff noticed that Stanley appeared to perk up after treatments and appeared generally more comfortable. A few days after his second treatment, he started to regain voluntary movement of his pelvic limbs and could bear weight with support. After his third treatment, Stanley was able to ambulate on his own unsupported. Stanley was discharged from the hospital after his third treatment (10 days of hospitalization) and acupuncture/laser treatments were performed weekly for 2 treatments. Stanley’s owners were initially leaning toward humane euthanasia due to Stanley’s age, and were ecstatic to take him home with him looking so much better. As Stanley started to feel better, acupuncture treatments became more difficult as he was less willing to sit still and would become quickly agitated, and tried to bite me as I placed acupuncture needles. Acupuncture treatments were discontinued due to his temperament and now Stanley comes in weekly for cold laser treatments. He continues to do well at home. Stanley is a great case as it shows how acupuncture and related techniques can help in the rehabilitation of dogs suffering from IVDD disc extrusion, especially where surgery is not pursued.