ABSTRACT: Yoshi is an adult German Shepherd dog (GSD) with an approximate 6 month history of mobility concerns, localized by the owner and on examination to the hind limbs (most specifically the left hind limb). At the end of the four treatments, Yoshi was more active, wanting to play, and in general seemed more comfortable.

HISTORY: Yoshi is a 10 year old male neutered German Shepherd. The owner first noticed that Yoshi was more hesitant with stairs and getting up from laying down approximately 6 months ago. No trauma or injury was noted at that time. Yoshi was seen by another veterinarian and was started on Adequan injections at 4.4mg/kg subcutaneously (SQ) weekly for 4 weeks and now is on the injection once monthly. Yoshi was doing very well on the Adequan injections for about 5 months before the owner noticed a left hind limb lameness. He also seemed to be stumbling at home and would have difficulty turning around. Yoshi has had no previous history of trauma. He has been in the same home since he was approximately 8 weeks old. He lives in a tri-level home, with 2 young children and no other pets. A dental was performed in April of 2019, no extractions were warranted at that time. Pre-operative bloodwork did not have any abnormalities. Radiographs of either hind limb have not been performed.

DEFINITIVE DIAGNOSES FOR TOP TWO PROBLEMS:
• Hip dysplasia & Degenerative Myelopathy
Taking Yoshi’s breed into consideration, I have a high clinical suspicion for both Hip Dysplasia and Degenerative Myelopathy. Since the owner has had Yoshi since he was very young and no abnormalities have been noted until now, my suspicion for congenital or traumatic causes is less likely.

MEDICAL DECISION MAKING:
My areas of concern for Yoshi were his intra-scapular region, lumbar spine, hips and specifically his left hind limb. My goals were to help relieve the tension from between his shoulders and lumbar spine, which are likely secondary to the abnormalities with his hips, and to help him move around more comfortably. I also wanted to improve the conscious proprioceptive dysfunction noted in the left hind limb. The owner’s goals for acupuncture were to help keep him comfortable and help with his general mobility. I had originally intended for the needles to be left in place for 30 minutes, however, Yoshi started to get more anxious around the 20 minute mark. In terms of frequency of treatments, I wanted to see Yoshi once weekly for 4 weeks and then make the decision for future treatments pending his response.
My plan for Yoshi was based on the MAIN treatment approach
• Central Nervous System:
o Inner Bladder Line points – This not only helps relieve tension along the lumbar epaxial muscles and intrascapular region, it also has wider reaches by affecting the dermatomes as they leave the spinal cord.
o GV 14 – Since Yoshi was sensitive on palpation of his forelimbs, I elected to do GV 14 and influence the brachial plexus nerves as they left the spinal cord. I did not palpate any myofascial dysfunction of the forelimbs, however, that could be attributed to his sensitive nature.
• Peripheral Nervous System:
o GB 31 – The goal was to target the femoral and sciatic nerves to help with the conscious proprioception dysfunction noted on exam
o Bafeng – The goal was to distally stimulate nerves of the pes to help with the conscious proprioceptive dysfunction.
• Autonomic Nervous System:
o GV 14 & Bai Hui – both of these points are parasympathomimetic. I was hoping these points would help with his anxiety while in the clinic. I was too nervous to attempt a GV 20 as Yoshi kept moving his head around and rubbing it on his owner’s shoulders. Yoshi was very sensitive on palpation of his forelimbs, so no other “anxiety” points were attempted (HT 3).
• Myofascial Dysfunction:
o Hip triad (GB 29, 30, BL 54) – On orthopedic exam, Yoshi had severely decreased range of motion (extension) in both hips.
o Inner Bladder Line lumbar spinal and intrascapular points – These were areas of tension on myofascial exam. 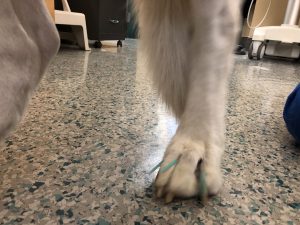 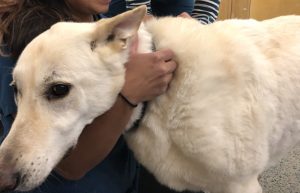 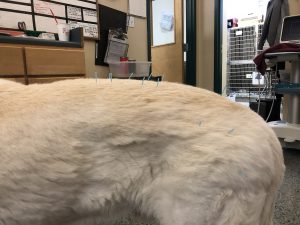 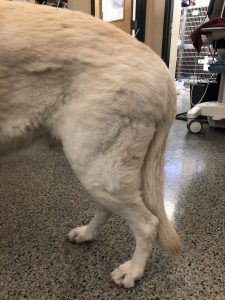 MEDICAL ACUPUNCTURE AND RELATED TECHNIQUES USED:
Treatment 1 Needles: 0.2X30mm Seirin J type needles. I elected to do a larger diameter size for the first treatment as Yoshi is a larger dog. I elected for the coated needles as it was his first acupuncture session and I wanted it to be as easy as possible on him.
Treatment 1 points selected: I chose to start with points that would be of the most benefit and then build from there depending on Yoshi’s response to acupuncture. All points were done with dry needling.
• GV 14: parasympathetic stimulation, central nervous system stimulation
• BL 13, 14, 15 (bilateral): central nervous system stimulation, relieve myofascial tension
• Bai Hui: parasympathetic stimulation, central nervous system stimulation,
• GB 29/30 & BL 54 (hip triad; bilaterally): area of decreased range of motion on exam
• Bafeng left pes (Yoshi was reactive on the right pes): peripheral nervous system stimulation
Treatment 2 Needles: I stayed with the Seirin 0.2X30mm because I wanted to increase the number of needles Yoshi received. Since he is a little anxious during treatment, I elected to stay with the coated needles:
Treatment 2 points selected:
• Kept all of the same points as Treatment 1
• BL 27 & 28 bilaterally: Area of most myofascial tension
• GB 31 bilaterally: Peripheral nerve stimulation (femoral & sciatic)
• LR 3: Peripheral nerve stimulation (deep fibular n), anxiety
Treatment 3 Needles: I started with a Carbo 0.25X25mm needle in GV 14 and immediately lost it in his hair coat. Elected to try the hip triad, Bai Hui, and GB 31 with the Carbo needles, since his hair coat was shorter and more flat there. Did the remainder of the points with Seirin 0.2X30mm needles to be able to find the needles better.
• No change to points addressed.
Treatment 4 Needles: I decided to stay with the Seirin Type J needles 0.2mmX30mm.
• No change to points addressed.

OUTCOMES, INSIGHTS, DISCUSSION AND REFERENCES:
After the first treatment, Yoshi’s owner noticed an improvement in confidence walking around. He was still very unstable on his feet and had a few falling over episodes. It was not until after the third treatment that the owner noticed the most improvement. Yoshi was running around the house and wanting to play ball outside, he did not have any more falling over episodes and handled different surfaces with ease.
On recheck before the second treatment, there was an improvement in the conscious proprioceptive deficit noted in the left hind limb. Prior to the third treatment, the deficit was gone. Tension in the intra-scapular region and along the lumbar spine improved with each treatment as well. No improvement was noted on extension of hips bilaterally.
Acupuncture released tension caused by changes to Yoshi’s gait. By stimulating his nervous system peripherally (Bafeng points), it improved his conscious proprioception.
I would have liked to try electroacupuncture on Yoshi to provide more pain relief to his hips and lumbar spine. I did not proceed with electroacpuncture as I thought he danced around too much for the Pantheon unit the practice has.