Osteoarthritis and Spondylosis in a 14-Year-Old Australian Cattle Dog

HISTORY: “Dylan” a 14yo MC Australian Cattle Dog living in Phoenix, Arizona presented for painful and sore in back end for a few years. Owner feels he is sore in front end evidenced by intermittent right front (RF) lameness after jumping off bed or quick burst movements. Lameness is usually walked off within a few minutes. Patient has seasonal fall allergies which is flared right now. Patient is very pruritic at tail base. Has been managed with Cytopoint. Activity consists of short walks to mailbox, roughly ½ mile. He walks better now that it has cooled off. No other medical history. No history of trauma. Recently moved from Ohio in January 2019. No daily medications or supplements given. Diet consists of Fresh pet or Dr Harvey’s base mix with homemade cooked beef.

PUTATIVE DIAGNOSIS: Suspect top two problems are related. OA and degenerative changes of hips led to mild disuse atrophy of cranial pelvic limb musculature and vertebral instability creating spondylosis along cervical, TL and lumbar regions. Suspect intermittent RF lameness is due to strain of soft tissue structures due to overloading and overstraining soft tissues of RF limb.
Boney neoplasia unlikely but cannot be ruled out as no long bone pain or masses appreciated, no lytic or proliferative bony lesions on radiographs. Peripheral nerve neoplasm also not as likely as deficits appear bilateral and no obvious conscious proprioceptive or other neurologic deficits. Vascular accident unlikely as presentation was not acute. IVDD still a great differential but survey spinal radiographs did not show changes in intervertebral disc space width or calcification of discs. Hip dysplasia unlikely as patient developed signs later in life and femoral heads had adequate acetabular coverage on radiographs. Coccidioidomycosis unlikely due to patient new to endemic area, no other clinical signs, and no bony changes on radiographs, also all lameness signs present prior to relocation. 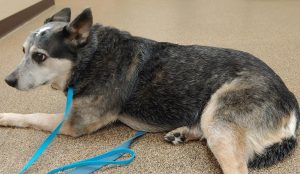 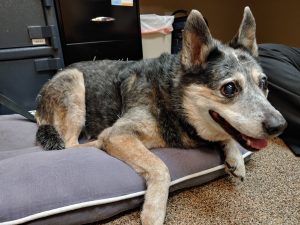 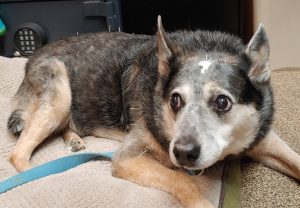 OUTCOMES, INSIGHTS, DISCUSSION: Medical Acupuncture and related techniques made significant and meaningful improvements to Dylan’s quality of life. Each acupuncture session included ST36 to support his PANS, GV20 to help with anxiety, and points related to the areas of known osteoarthritis. The second treatment focused more on the hips which had a more favorable pain-relieving effect than the first treatment, evidenced by owner joy over increase stamina and strength on walks. The third treatment addressed more of his compensatory strain patterns of his neck and thoracic limb musculature. After the third treatment, the owner reported Dylan was much more energetic and willing to ‘play as a heeler does’ with invites to play and snarls with improved ability to jump on and off bed.
I believe treating his secondary strain patterns and myofascial dysfunction improved his response dramatically because the compensation is continual, cyclical, and additive. Strain patterns continue to evolve over a broader area, contributing to increased muscle shortening and associated ischemia and pain.
Recommended treatment plan for Dylan is acupuncture and laser treatment every 3-4 weeks. I may also utilize non-steroidal anti-inflammatories and pain medication as needed to complement my acupuncture and laser treatments. I learned how powerful it is to treat beyond the primary problem and address secondary disorders appropriately, especially when involving musculoskeletal and myofascial systems.
No adverse events occurred during any treatment.