Abstract: Congenital hip dysplasia is a likely diagnosis in a five year-old Golden Labrador Retriever with a distinct hind limb abduction and gait abnormality. Acupuncture successfully improved the myofascial restrictions that occurred as a compensatory response to hip and sacroiliac pain. Furthermore, the patient’s energy levels and range of motion improved, while his gluteal pain decreased.

History: Toby is an active five year-old neutered male Golden Labrador Retriever. His owner has had him since he was a puppy. He was intended to be a Leader Dog for the Blind, but failed a training exam. Since then, his owner enjoys hiking with Toby. He lives at home with a bird, cat, another dog, guinea pig and several ducks. He is current on his vaccinations, receives monthly Heart Guard®, wears a Serestro® flea and tick collar, and eats 2 cups of Royal Canin Large Breed dog food per day. Toby currently receives Claritin daily for his seasonal allergies. When his allergies are more severe, his owner has routinely switched to Apoquel in past years. He is reported by his owner as happy and healthy, but she is concerned about a slight gait abnormality that he has had since puppyhood and the implications it may have on his ability to hike and stay active as he gets older. Toby also fractured first phalanx (P1) of his 3rd digit of his right hind leg 3-4 weeks ago and is reported to be weight bearing and recovering well.

Physical examination and clinical assessment: Toby first presented on 9/25/2019. He was bright alert and energetic. Toby’s vitals were unremarkable with a heart rate of 92, panting respiratory rate, pink and moist mucous membranes, and a capillary refill time less than 2 seconds. A rectal temperature was not obtained. Toby’s dentition was normal with minimal dental tartar. Cranial nerve reflexes, menace response, spinal reflexes, proprioception and patellar reflex were all within normal limits. Toby’s joints palpated without concern and had adequate range of motion. Myofascial examination revealed bilateral ropy bands in the triceps, myofascial restriction in the left trapezius, and tight bands in the left biceps femoris. Toby was bilaterally tender and guarded over his gluteal muscles and had restricted myofascial movement in his left tensor fascia latae.

Putative/definitive diagnosis: Toby did not have radiographs taken of his hips; however, the history and chronicity of his bilateral gait abnormality is highly suggestive of canine congenital hip dysplasia. Toby’s owner did indicate that radiographs were taken on his recently fractured P1 on his right hind limb 3rd digit. The myofascial abnormalities palpated on the left hindlimb could be a result of compensatory weight bearing. The seasonality and localization of Toby’s pododermatitis suggests seasonal allergies, likely due to his love for the outdoors and hiking.

Medical decision making: The primary concern of Toby’s owner, was for his comfort and management of the pain and stiffness arising from his gait abnormality and compensatory weight bearing. Toby was treated once a week for four weeks. A myofascial exam and observation of gait was achieved at the beginning of each session. Dry needling and massage was performed on myofascial points, with priority given to central and peripheral points based on Toby’s tolerance to the needles.

To treat Toby’s pododermatitis, we elected not to treat any local points due to the risk of needle ingestion. Instead, the points GV14, ST36 were used for their dual purpose in immune modulation and autonomic modulation. 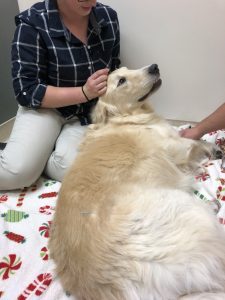 After the first appointment, Toby responded positively to the GV points by laying calmly on a padded mat. Additional points were added based on the side Toby had exposed while laying down. BL 25 and BL 27 were treated with Serin J type 0.20 x 30 mm needles for their role neuromodulating lumbosacral and sacroiliac nerves. BL 54 was treated for the gluteal muscle sensitivity elicited on myofascial palpation. GB 29, GB 30 and GB 31 were targeted because of their proximity to the coxofemoral joint and role in modulating hip pain.

ST36 was treated for its autonomic role in modulating inflammatory and immune responses, but was not tolerated by Toby and was removed 7 minutes after placement on the right. Use of this point was limited and short in duration during the second and fourth treatments.

Myofascial points specific to the forelimbs were selected based on the palpation of ropy and taught bands. SI11, SI 12, and GB 21 were targeted with Serin J type 0.20 x 30 mm needles to provide relief from compensatory forelimb loading, likely secondary to hip and sacroiliac pain. Local massage was used in addition to dry needling to provide myofascial release and increase circulation.

Outcomes: Toby was initially guarded and more alert during the first treatment, which is why his owner and I elected to only needle calming points and to focus on building trust with Toby. After the second treatment, Toby relaxed much faster and allowed us to add other points (described above). Toby’s owner noted she felt Toby’s comfort and coxofemoral range of motion was improving after the second treatment.

During the myofascial exam in the third treatment, Toby had significant improvement in palpation of his shoulders and antebrachium. His left triceps still felt slightly ropey, but his right was markedly improved. Toby was still reactive to palpation over his gluteal muscles, but the myofascial restriction initially assessed in his tensor facia latae had resolved. Toby continued to do well throughout the fourth treatment. His owner noted he had been on a hike the previous weekend and had done well. Toby still exhibited slight ropiness in his left triceps, but his gluteal muscle sensitivity was markedly improved.

During Toby’s last gait analysis, he appeared to have a great deal of energy and enthusiasm for working. The rigidity throughout his back and abduction of his hind limbs appeared improved from his initial presentation.

Discussion: Toby’s case illustrates the importance of using acupuncture to mediate myofascial restriction and pain caused by a (likely) primary congenital hip dysplasia. In addressing pathology that occurs secondary to preferential weight bearing, acupuncture can be used to manage the locomotor problems that are refractory to the primary congenital cause and can aid in the neuromodulation of pain and tissue repair. Part of the success of this treatment was owner compliance in performing range of motion exercises with Toby. Other modalities that would supplement the management of hip dysplasia are electroacupuncture, and photomodulation with laser. In conclusion, the management and myofascial maintenance of athletic canines with chronic orthopedic conditions can be attained through regular treatments with acupuncture.