Abstract
A 20 year old quarter horse gelding presented for urinary bladder atony and urine retention as a result of previous infection with Equine Herpes Virus – 1 (EHV-1). No improvement was noted after several rounds of medications and urinary bladder catheterization. Acupuncture and electroacupuncture were performed once weekly for 5 weeks at the end of which the patient was observed to actively urinate on his own and the urinary bladder was noted to be significantly smaller via ultrasound and palpation exams.

History of Present Illness and Chief Complaint
On 9/30/2019, a 20 year old quarter horse gelding presented for inability to urinate, urine dribbling, and hind end ataxia. The owners had first noticed it three days ago after returning from a barrel racing event. The patient had a mild fever (102.0*F), normal heart rate and respiratory rate and appeared lethargic. Ultrasound of the urinary bladder revealed a distended bladder extending beyond the scope of the ultrasound (over 30cm) filled with mucous strands and sediment. A urinary catheter was placed and the bladder was drained. A routine blood panel (complete blood count and chemistry panel) was run with the complete blood count being within normal limits and mild hyperkalemia, mild hyperglycemia, and mild hyperbilirubinemia noted on the chemistry panel. All other values were found to be within normal limits. Nasal swabs and blood were collected and sent to UC Davis for testing for EHV-1, West Nile Virus (WNV), and Equine Protozoal Myelopathy (EPM).
On 10/2/2019, the patient was found to be positive for EHV-1 and negative for both WNV and EPM. The patient was placed on quarantine and received supportive care of intravenous fluids and flunixin meglumine. The patient continued to retain urine and the urinary bladder was drained daily. Due to facility concerns and potential spread of the disease, it was decided that the patient should be quarantined at home rather than at the clinic. The patient was discharged on 10/4/2019 for continuation of care at home. During that time, the owner had noted continuation of urine dribbling. The patient was prescribed oral flunixin meglumine and oral trimethoprim-sulfa to be given at home for suspected urinary tract infection from frequent urethral catheterization. At the end of the course, the owners relayed that the dribbling had not resolved. The patient was additionally prescribed a trial of oral prednisolone for two weeks starting on 11/4/2019. On 11/13/2019 the owners reported no major changes in urine dribbling despite oral steroids. Ultrasound of the bladder revealed a distended bladder exceeding the limits of the ultrasound with dense echogenic material swirling around. The bladder was drained and flushed and the patient was placed on five days of bethanechol, Ulcergard, and instructed to finish the prednisolone with a tapering dose. At this time the owner was referred for acupuncture. After two consecutive negative nasal swabs and blood samples, the patient was officially released from quarantine on 11/13/2019.

Physical Exam and Clinical Assessment
On 12/18/2019 the patient was presented for draining of the urinary bladder and acupuncture. All vitals were found to be within normal limits. While walking, the patient occasionally dribbled urine. The penis was noted to be only partially retracted into the sheath. Rectal palpation revealed a large, atonic bladder. A catheter was passed and the bladder was drained and lavaged. No proprioceptive deficits were noted during the exam. The patient had good tail and anal tone. Myofascial exam revealed moderate-severe sensitivity of the longissimus dorsi muscle from the 15th thoracic vertebra to the 6th lumbar vertebra bilaterally. Additionally, the patient had moderate restriction of the subcutaneous tissues over the caudal thorax and lumbar areas. Mild pain was seen during palpation of the middle and superficial gluteal muscles bilaterally.

Differential Diagnoses
Differential diagnoses for an atonic bladder include prior infection with the neurologic form of EHV-1, EPM, WNV, urinary bladder ischemia due to urethral obstruction, cauda equina syndrome due to injury, polyneuropathy, and melanoma on the spinal cord.
Differential diagnoses for longissimus dorsi pain include myofascial restriction, altered mechanics due to distended bladder, poor saddle fit, hock or stifle arthritis, and soft tissue injury.

Definitive Diagnoses for Top Two Problems
The top differential for bladder atony is infection with the neurologic form of EHV-1. This was confirmed with the positive nasal swab obtained. EPM and WNV were both negative during testing. Urethral obstruction was ruled out while passing the urethral catheters and no resistance was noted and no stones were noted on ultrasound of the bladder. Cauda equina syndrome, polyneuropathy, and melanoma on the spinal cord all remain less likely as the clinical signs were localized only to the bladder, as opposed to generalized hind end neurologic signs which are more common with these ailments.
The top differentials for longissimus dorsi pain include altered mechanics due to the weight of a distended bladder and myofascial restriction of the thoracic and lumbar spine. Poor saddle fit and arthritis were both ruled out due to worsening of the back pain while the patient was being rested. Soft tissue trauma remains a potential differential, however the owner never witnessed any events that may have led to the patient injuring himself in a manner that may lead to back pain.

Medical Decision Making
Urinary bladder wall activation is influenced via parasympathetic inputs from the Vagus and Pelvic nerves, stemming from the second sacral segment to the fourth. The origins of these nerves were targeted with Bladder points along the sacrum. Back Shu and Front Mu points for the urinary bladder were also utilized to increase parasympathetic tone to the detrusor muscle. Distal points along the tibial nerve were utilized to create long loop reflexes. Trigger points along the Bladder line were applied to treat the back pain associated with the weight of the distended urinary bladder and associated myofascial restriction. 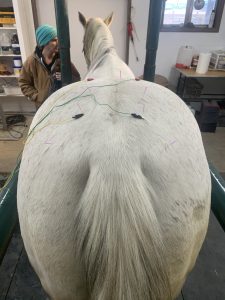 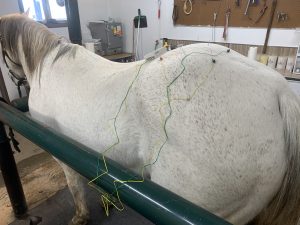 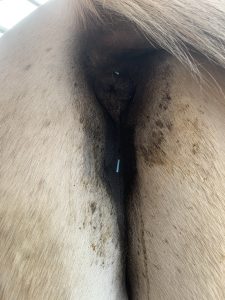 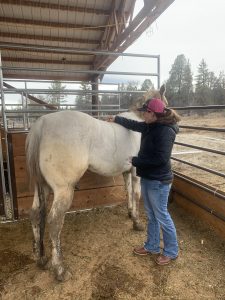 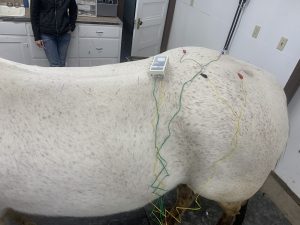 Outcomes, Insights, Discussion
Overall, the patient made moderate improvements in urination ability. At the end of the sessions the owner relayed that the patient was seen to be posturing and creating a urine stream. During acupuncture sessions 3 and 4 the patient urinated a small stream multiple times while electroacupuncture was being performed on BL26-BL28. Myofascial exam of the longissimus dorsi muscle at the end of the sessions showed decreased sensitivity and increased flexibility of the subcutaneous tissues along the lumbar spine. The owner also mentioned that she noted the patient appeared to be more confident while backing out of the trailer since starting the acupuncture.
Although the patient was seen to be urinating, he continued to retain urine in his bladder and required frequent catheterization and draining. The evidence of urination during the acupuncture sessions specifically when the points over the sacrum were being stimulated truly suggests that the electroacupuncture helped create the impulse for the detrusor muscle to contract. The question remains whether or not more frequent acupuncture would have decreased the need for regular draining of the bladder. Due to distance of the client and patient from the clinic, it proved difficult to see the patient more frequently than once weekly. A study on frequency and duration of acupuncture sessions may prove valuable for deciding what sort of timeline should be created for seeing clients back when their animals are experiencing nerve damage similar to this case. Additional therapy with medical laser over the sacral spinal segments may also have improved this case outcome by mitigating cellular damage and improving blood flow to the spinal cord segments and nerves that were damaged during infection.