Osteoarthritis and Progressive Hind End Weakness in a Geriatric Labrador

History and Presentation:
Modoc is a 14-year-old neutered male Labrador retriever who has been with his family since his purchase from a breeder when he was a puppy. Wellness exams, vaccinations, heartworm tests, and fecal floatation tests have been performed annually. Modoc is on monthly flea/tick and heartworm preventative medications. As a young dog, Modoc was very active and enjoyed playing fetch and chasing squirrels excessively. He has a history of inflammatory bowel disease that has been managed with prescription gastrointestinal diets, FortiFlora probiotics, and budesonide. A grade 2-3/6 heart murmur was noted during a wellness exam in 2013, and a chronic, worsening cough and heart enlargement on thoracic radiographs prompted referral to a veterinary cardiologist for an echocardiogram in early 2018. At that time, he was diagnosed with dilated cardiomyopathy and concurrent degenerative valve disease. His cardiac disease is managed with pimobendan, benazepril, and taurine supplements. As Modoc has gotten older, his owner noticed him having more trouble getting around, especially on the hardwood floors in her home. He has had episodes of intermittent forelimb lameness and progressive hind end weakness. He will slip and fall when trying to walk around the house on the hardwood floors, has difficulty using the stairs on the deck to get into the backyard, and has stopped chasing squirrels. Modoc currently receives CBD oil and Adequan injections for management of pain and inflammation associated with his osteoarthritis. He was previously on gabapentin for pain control but he had more difficulty getting around while taking it due to its sedative properties and it has since been discontinued. His appetite has remained normal per owner, but Modoc continues to lose weight and muscle mass despite an increase in his daily caloric intake. Modoc received multiple acupuncture treatments in the past, but had not been treated in over a year due to his previous veterinary acupuncturist moving out of the area. His owner feels that acupuncture did improve his condition when he was receiving treatments, and hopes that continued treatments will enhance his quality of life while he is still with her.

Physical Examination and Clinical Assessment:
Modoc was examined in his home. Upon arrival, Modoc was laying on his orthopedic dog bed and had difficulty rising to follow his owner to the door to greet me. Modoc is very loyal to his owner and despite his difficulty ambulating, he tried to follow her everywhere. Modoc was bright, alert, and responsive on initial presentation. A gait assessment was performed and then Modoc was returned to his bed for his general physical examination and myofascial examination.

Gait Assessment:
Modoc’s gait was slow and stiff with a shortened hind end stride and lateral rotation of his hind limbs upon their placement on the floor. His left hind limb appeared stiffer than the right, and he appeared to swing the limbs forward abruptly as a result of this stiffness. His stance was narrow-based in the hind and wider in the front. His digits were spread widely apart upon placement of all four paws, but was more notable in both forelimbs. He displayed bilateral carpal hyperextension as well. Mild kyphosis at the thoracolumbar spine noted. No stumbling was caught on video but he did stumble a few times during the sessions.

Myofascial, Musculoskeletal, and Neurologic Examination:
Modoc was mentally appropriate. Body condition score 4/9. His indirect and direct pupillary light reflexes and menace response were intact bilaterally. Modoc’s head appeared sunken due to marked, bilateral muscle wasting of the temporalis muscle. There was marked muscle wasting of the supraspinatus and infraspinatus muscles. Taut muscle bands were present upon palpation of triceps muscles bilaterally. Modoc was sensitive upon palpation of these muscle bands. There was loss of muscle mass along the spine bilaterally. His epaxial muscles were taught upon palpation near the thoracolumbar region and he displayed discomfort upon soft tissue palpation in this area. No overt discomfort noted on palpation of the spine itself. Mild tarsal valgus apparent. Laxity and decreased range of motion of both hips noted. Crepitus and thickening of both stifles was also noted. He had crepitus of his carpus and tarsus bilaterally. Mild thoracolumbar kyphosis apparent. Modoc also had marked muscle wasting of his gluteal muscles and biceps femoris muscles bilaterally. He had decreased conscious proprioception of both hind limbs, and normal conscious proprioception of both forelimbs. His withdrawal reflex was normal in both hind limbs. Modoc’s patellar reflex was decreased bilaterally. 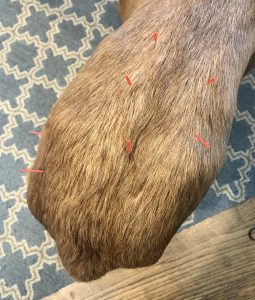 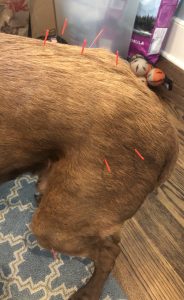 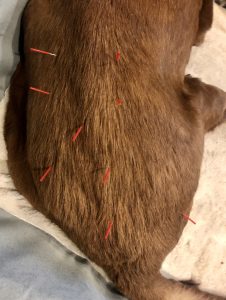 Outcome:
Modoc was initially restless during treatments, but soon calmed down after placement of GV 14, GV 20, and Bai Hui. He was able to relax during the treatments and sat nicely for a peanut butter snack. Following treatments, his gait was still stiff, but he appeared to be more comfortable due to the relief of his trigger points and taut muscle bands. After his second treatment, his owner reported that he seemed to be getting around more easily and even wanted to go on longer walks. He would run around more outside to chase the squirrels and seemed to have improved mobility overall. Due to the busy holiday season, we were unable to schedule further treatment sessions for a few weeks. Unfortunately, Modoc’s overall condition began to decline shortly after the holidays and his owner elected humane euthanasia and therefore, we were unable to continue his acupuncture treatments.

Discussion:
Throughout Modoc’s treatments, there appeared to be pronounced improvement to his comfort level and overall quality of life. Modoc had received acupuncture treatments before his sessions with me, and his owner reported significant improvement in his condition with the combination of acupuncture and CBD oil. After our sessions, Modoc became more mobile and was able to sustain himself for longer walks and backyard play sessions. Although timing did not allow for us to continue his treatments regularly after his initial three treatments, it was a great learning experience for me, and taught me how multi-modal treatment protocols can significantly improve an elderly patient’s quality of life.