The Mascots of MAV and their Flea & Tick Spray 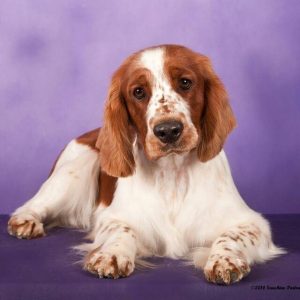 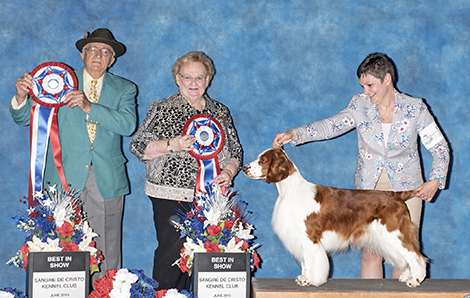 Since coming on board with Dr. Robinson and all her programs, my dogs have become an integral part of the hands-on sessions.  In fact, Sammy is featured in the online canine big point review module, so many know her before they arrive.  My husband and I have raised, trained, and have shown dogs since 1995.  For more than half of that time, we had only Golden Retrievers, acquiring our first Welsh Springer Spaniel in 2011. While we had Goldens prior, my first well-bred Golden, Aspen, wound up dying from Lymphoma at the tender age of just three years old.  Like many, I believed strongly something was very wrong.

Through tragedy, lots of reflection and research can happen.  A reality hit me that we do so many things to these dogs, all in the name of doing GOOD for them, but it the long run is it really?  Generationally treating dogs for worms, heartworm, fleas and ticks, along with, at that time, doing yearly vaccinations.  Yearly vaccinations and semi-yearly insecticides.  Maybe we are the problem.

Months after Aspen’s passing, I met Valerie Robson.  She knew more about essential oils than anyone I had ever met.  Not only did she understand their uses and limitations, but she was passionate about spreading the word about them.  While the recipes here have evolved a bit since then, they are basically the same ones she gave me when I was looking for more natural way to control fleas and ticks.  Her husband works for their county, which is higher in elevation.  When the county crew encountered an area with lots of ticks, she sent spray bottles mixed up with quite a bit of geranium oil in them.  To everyone’s amusement, because all of these workers now smelled like flowers, but they were ecstatic that the spray kept the ticks off of them.

We have been using the spray on our dogs, and ourselves, exclusively since 2000.

Because we show, we travel – often coast to coast.  We’re in different states with different insects, and different climates.  We usually keep several spray bottles mixed up, one in the van, and now one in the RV.  When we stop at rest stops, or even to stop for the night, we grab the bottle and give a quick spray to the dog’s legs and underbelly.  The spray has been very successful for us at keeping insects at bay.  Even mosquitos don’t care for the smell, so it’s a great deterrent for them as well.

Besides the natural spray, the other thing that I cannot stress enough, is that MY dogs are regularly bathed.  On a trip to Houston to pick up our boy Sailor, we managed to NOT take our spray with us.  Sure enough, we brought back a few fleas.  I could have treated them with insecticides, but I chose not to.  Fleas will drown/die in soapy water.  I chose to use my natural spray for the environment (our home, their dog beds, the yard,) and give them baths in regular dog shampoo/conditioner.  It may have taken us a bit longer to completely eradicate them, but we did get rid of them completely, all without the use of insecticides.

There certainly may be times where insecticides are needed, just as we believe integrative medicine should be front-line in treating many problems, using a more natural approach should always be tried first.  Of course, we weigh the pros and cons as well, informed by available evidence concerning their safety and effectiveness.  One can always use something stronger if the natural approach is not giving enough protection, but you just might find that the natural approach is all you need, and that is certainly healthier for our companions.