Medical Acupuncture for a 16-Year-Old Dog, Previously Unable to Ambulate Due to Pain and Stiffness 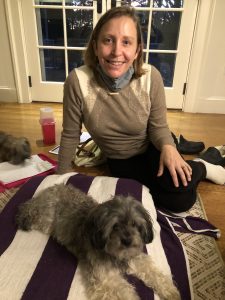 Chloe is a 16-year-old, female spayed miniature poodle mix. She has a history of immune-mediated polyarthritis (IMPA) that is currently in remission. She had been on prednisone and cyclosporine in the past for her IMPA but is currently not on any immunosuppressive medications. She has a history of mitral valve and tricuspid valve regurgitation, pulmonary hypertension and developed congestive heart failure in November 2020. Chloe tore her right cranial cruciate ligament and had a lateral suture repair years ago, but her right stifle is currently unstable suspected secondary to ligament laxity from chronic steroid use. In July of 2019, Choe tore her a left cranial and caudal cruciate ligament and had a lateral suture repair the following month. She is currently on pimobendan, furosemide, grapiprant, gabapentin and polysulfated glycosaminoglycan. A complete blood count, chemistry panel and urinalysis performed November 2021 showed a severe neutrophilia, mild azotemia and dilute urine. She recently had a surgical consultation to address worsening right pelvic limb lameness. The orthopedic examination from this visit revealed stiffness in all joint of bilateral forelimbs with decreased range of motion, toe-touching lameness in the right pelvic limb and instability in the right stifle. Radiographs were performed of the right stifle, tarsus and carpus and showed loss of articular cartilage consistent with her previous IMPA. Because of her underlying heart disease and high risk for anesthesia, the surgeon discouraged surgical stabilization of the right stifle again and recommended physical therapy and acupuncture. Since then, Chloe has been routinely receiving physical therapy and cold laser therapy. I performed three acupuncture treatments on Chloe, each a week apart. Her owners goals are to improve her mobility, reduce her pain and improve her quality of life.

On physical examination, Chloe had a grade III systolic heart murmur, moderate tartar, lenticular sclerosis and an unkempt haircoat. She had diffuse muscle atrophy, severe crepitus and pain on extension of bilateral stifles and instability in the right stifle with a cranial drawer sign. Her spine was moderately kyphotic at the thoracolumbar junction. She was ambulatory in all four limbs but lame in all four limbs most prominently in her pelvic limbs, and her hocks were dropped. To ambulate, Chloe would hoist her head up for momentum and bunny hop with her pelvic limbs. She would use her tail for balance. Her neurologic exam was normal. Unfortunately, because Chloe was quite nervous and resistant to touch for my first visit, my myofascial exam was more limited than I would have preferred.

Differential Diagnoses for at Least the Top Two Problems:

For Chloe’s treatments, I went to the owner’s house. My initial evaluation and treatment were not ideal. While Chloe is normally a very sweet and compliant patient, I made the mistake of not communicating with the owner that it would be best for a family member be present during treatment to help reassure Chloe. When I reached out to touch Chloe to start my myofascial exam, she immediately tried to bite me. As a result, my initial myofascial exam was more limited than I would have liked. For the subsequent treatments, since the owner was present, Chloe was much more receptive to handling and treatments.

Chloe is suffering from numerous problems from cardiac and immune-mediated disease to mobility issues and pain from orthopedic and myofascial problems. For my treatment, I wanted to address all of these issues. I chose acupuncture points to help reduce anxiety, improve immune function, improve heart function and help reduce pain in Chloe’s stifles, forelimbs and neck.

For Chloe’s treatments, I performed dry needling once a week for three consecutive weeks at her home. I used Seirin J type No.1 (0.160 X 30 mm) acupuncture needles. Because Chloe was quite anxious during her first treatment, she only tolerated a few needles. I chose locations that I thought would be less painful and that would be the most effective. I chose GV14 since it’s associated with the cervicothoracic spinal nerves and therefore would help with any pain in her neck from overuse in assisting movement, and it would help with pain from myofascial restriction in her thoracic limbs. GV14 also promote immune function which I thought would be beneficial considering Chloe’s history of immune mediated polyarthritis. I chose Bai Hui, associated with the mid- to caudal lumbar spinal nerves for its benefit to help alleviate pain and neuromodulate the pelvic limbs since Chloe’s primary lameness is in her bilateral pelvic limbs. I then chose BL15 as it is the back shu point for the heart considering Chloe’s history of heart disease. BL15 also provides the secondary benefit of reduction of anxiety.  I then chose BL23 since this point is associated with the thoracolumbar spinal nerves and helps with lumbar and pelvic pain. Finally, I treated GB20 to help with any neck pain from overuse and overcompensating for her pelvic limb lameness.

In the subsequent two treatments, since the owner was present and Chloe was more accustomed to needling, I was able to incorporate more acupuncture points. For Chloe’s second treatment, I treated GV14, BL15, BL23 and Bai Hui as before and I added GV 20, BL10, BL52, and ST36. I chose GV20 to help alleviate any anxiety and to relieve any neck tension from overuse since its associated with cranial cervical spinal nerves. I added BL10 to also help with any neck pain. I added BL52 since it is associated with the thoracolumbar spinal nerves and helps with lumbar and pelvic pain. Finally, for her second treatment I was also able to incorporate ST36 both for its benefit to reduce stifle pain and because it helps that immune system and has anti-inflammatory benefits.

For the third and final treatment, many family members were present and Chloe really seemed to enjoy the treatment and attention. I treated GV20, BL10, GV14, BL15, BL23, BL52, Bai Hui, ST36 as before, and I added BL40, ST34 and LI11. I chose to add BL40 as it is the master point of the pelvic limb and helps relieve pain and improve neurologic function in Chloe’s pelvic limbs. I chose ST34 as it is associated with the femoral nerve and helps with stifle pain, instability and dysfunction. Finally, I chose LI11 to help with Chloe’s general decreased range of motion in all her forelimb joints and to help with her immune function and decrease inflammation.

Based on the pre-treatment and the post-treatment videos, as well as the owner’s impression, Chloe’s mobility and general well-being seemed to improve slightly with the acupuncture treatments. In the first videos pre-treatment, Chloe was hesitant to walk at all, though this may have also been because her anxiety without her owners were not present. In the videos post-treatment, though still quite lame in all four limbs and still hopping in her pelvic limbs, she is much more willing to ambulate and seems less lame than in the pre-treatment video. The owner also reported that after the treatments, Chloe was very calm and relaxed and was wagging her tail more. Prior to her acupuncture treatments, Chloe had already been receiving routine physical therapy and was taking gabapentin and grapiprant. No new medications or therapies were instituted during the period of her acupuncture treatment so I can assume that the benefits were from the dry needling. This case taught me to make sure to communicate with the owner that a trusted family member should ideally be present until the patient becomes accustomed to me and the needling. Even a docile dog like Chloe can be very fearful for the first treatment, and an owner’s presence can relieve some of that anxiety.

Based on Chloe’s response, I believe that acupuncture should be considered as an option for pain management and neuromodulation in dogs with cruciate ligament instability, particularly in patients where surgical stabilization is not an option due to heart disease, advanced age or other organ dysfunction that precludes anesthesia. Though research has shown the benefit of acupuncture in treating pain for cranial cruciate ligament rupture in dogs as compared to conservative care (Ciolanescu, 2020), further medical research is warranted to compare the outcome of these dogs who received surgical intervention versus acupuncture.