Tetraparesis in a 5-Month-Old Corgi, Treated with Medical Acupuncture 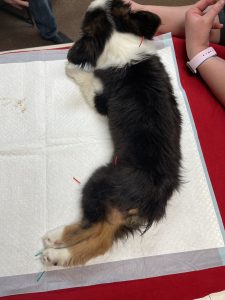 A 5-month-old, female intact, Corgi mix presented for acupuncture treatments after a traumatic injury to her cervical region. After three weeks of treatment including a combination of dry needling, electroacupuncture, massage, pain management, and physical therapy the patient gained motor function of all four limbs.

Willow is a 5-month-old, female intact, Corgi mix. Willow presented to another associate veterinarian at the clinic on January 24th, 2022 after accidental head/neck trauma. Owner’s main complaint was that Willow could not move any of her limbs. She had no history of previous illness, trauma, or toxicosis. After stabilization and about three weeks of conventional treatment it was noted that Willow’s improvements had plateaued. She was then referred for a second opinion and acupuncture treatments.

January 24th, 2022 (Initial presentation): Willow presented in lateral recumbency. Her vitals were all within normal limits (WNLs). A cranial nerve exam was completed with no deficits noted. Tetraparesis present, but deep pain was noted in all four limbs. Radiographs were taken at this time with no abnormalities found.

February 14th, 2022: Willow presented for her first acupuncture treatment and assessment. On physical exam it was noted that she could now sit in sternal recumbency unassisted. Her vitals remained WNLs. Heart and lungs auscultated normally. Moderate generalized muscle atrophy was noted. Normal range of motion (ROM) of all four limbs. On passive ROM of her neck, it was noted that Willow did not want to look dorsally, but would easily move from side to side and look ventrally. Myofascial exam revealed tight bands when palpating her lateral neck bilaterally. Neurologic exam showed normal patellar and sciatic reflexes in both hind limbs. Local withdraw reflexes present in all four limbs. Deep pain noted in all four limbs. Normal anal tone.

The definitive diagnosis was determined to be traumatic cervical intervertebral disc protrusion with secondary myofascial dysfunction/strain of regional neck muscles. This was concluded based on a history of cervical neck trauma, physical exam findings, and radiographs.

The acupuncture approach and sequence of treatments was determined based on physical exam findings and published literature. Based on the reference articles below a treatment schedule of 2-3 treatments per week for a minimum of 2-weeks was recommended. The needle placement and decision making focused on local neuromodulation of the cervical region to encourage neuronal regeneration, vasodilation, and anti-inflammatory properties. Distal limb points were also incorporated in the treatment to help stimulate conscious proprioception.

Electroacupuncture was completed on treatments 2 through 8. An ITO electro-stimulator was used throughout the course of treatment. The leads were placed from BL 10 to BL 15 for 10 minutes at a frequency of 4 Hz.

BL 10 was selected to help with local pain as well as stimulate the trigeminocervical reflex. BL 11/15, and cervical spinal nerve points were selected to address regional tension and pain. BL 40 was placed to address pelvic limb paresis. GV 14 was chosen for its effects on immunologic dysfunction and nerve stimulation to address thoracic limb weakness. SI 3 was selected as a distal limb point for its stimulation of the ulnar nerve, which originates from the cervicothoracic spinal segment. ST 34 was a point selected during later treatments to help address myofascial dysfunction. ST 36 and LI 4 were both chosen for their anti-inflammatory properties. ST 36 focuses on parasympathomimetic stimulation, while LI 4 helps with sympathetic regulation. KI 1 and 3 were selected in later treatments to help strengthen neurologic connections to the hind limbs. KI 1 was chosen specifically for its sympathetic activation ability to help address the sensorimotor loss that was present in the hind limbs. In later treatments GB 29 and 30 were selected to address neurologic dysfunction and trigger points as the patient became more ambulatory. Bai Hui was chosen to address pelvic limb dysfunction. Baxie and Bafeng points were selected to help stimulate peripheral nerves to promote conscious proprioception.

Seirin J-Type needles were primarily used for all needle placement. Length was 30 mm, gauge sizes 0.14 mm, 0.16 mm, and 0.20 mm were all used and selected accordingly to location and patient preference. Carbo, gauge 0.20 mm, 13 mm length were used for electroacupuncture.

On conventional pharmacological treatment Willow’s recovery had plateaued at the 3-week timeframe, but she made vast improvements were noted after starting acupuncture. There was mild increased motor function in her front limbs after the first treatment, but notable motor function improvement in all four limbs by the third treatment. Her improvements are largely attributed to her acupuncture treatments and her owner’s dedication to physical therapy exercises completed at home. Acupuncture and electroacupuncture not only help address underlying pain, but also help with neurologic recovery. Neuroanatomically designed protocols allow the provider to select points that are specific for that patient’s injuries. These points are selected to help neuromodulate at both the injury site as well as peripherally. Acupuncture helps improve blood flow to musculature and helps attenuate inflammation which is important when treating spinal cord injuries.

This case has taught me the importance of creating a well thought out protocol that not only addresses the primary injury, but also includes points that stimulate the central, peripheral, and autonomic nervous systems. This is the basis of the MAIN (Medical Acupuncture and Integrative Neuromodulation) approach that should be used in every protocol. What I found clinically relevant about this case was the time frame in which Willow became ambulatory. In Liu’s study referenced below, the amount of time to become ambulatory was about the same time interval from initial injury to starting acupuncture. For example, if there was a 2-week interval from initial injury to starting acupuncture treatment then it took about 2-weeks for the patient to become ambulatory. This same time interval was noted in this case. I think this is very relevant to help provide an estimated timeline and expectation for the owners.