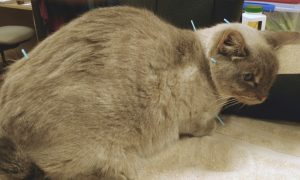 Abstract: Acupuncture therapy can be used as an adjunct for many traumatic injury cases to both speed wound healing and to aid in supportive care such as appetite stimulation and pain control.  The following is a case report of a feline patient who was attacked by a Jack Russell Terrier resulting in significant soft tissue damage to the tissues of the left and midline ventral neck and jaw.  The patient had become severely hyporexic during the first week after his injury and had lost approximately 20% of his body weight.  His owner was reluctant to submit the patient to surgical intervention including placement of an esophagostomy tube.  The patient underwent three acupuncture treatments at 1-week intervals and by the time of his final treatment he had regained a significant amount of his weight and his wounds and secondary problems had all resolved.

History / Presentation: Lenny is a 14-year-old male, neutered Siamese cat.  He was bitten in his home by a visiting Jack Russell Terrier and the attack was witnessed by the owner.  His injuries were confined to soft tissue structures of the left ventral neck and chin.  His wounds were immediately treated by a veterinarian.  They were clipped and thoroughly cleaned and allowed to heal open.  He was treated, in addition, with subcutaneous fluids, Onsior, Buprenex, and Convenia.  His pain control and fluids were continued over the coming week however his condition deteriorated.  The soft tissues became very swollen with some areas of infection and necrosis developing centrally.  Lenny was completely unwilling to eat or drink and was being syringe fed though he did not take it well.  After several days he began to develop a dermatitis on the medial aspect of his left carpus and manus secondary to overgrooming.  By the time of the first acupuncture treatment (10 days after the incident) Lenny was also beginning to develop significant sneezing.  He does have a long history of a weepy right eye with a mild deformation of the right eyelids and a chronic sneeze but it was not historically as bad as it was at the time of presentation.

Physical Examination and Clinical Assessments: Physical exam findings reveal normal vital signs and neurological function.  There is significant soft tissue swelling of the left neck extending from the thoracic inlet cranially to the jaw and extending along the ventral jaw primarily on the left side.  There is no flocculence to the swelling but there is an odor of necrosis present and a small area of necrosis centrally.  The soft tissues in and around this area extending to the shoulder are uniformly tense and uncomfortable to palpation.  The fur near his mouth and on his left medial manus has some canned food crusted on it.  There is moderate dermatitis characterized by erythema and mild scabbing on the medial left manus.  Moderate ptyalism is present and the left nostril has mucoid discharge however no intraoral abnormalities are identified.  Body condition score is 3/9 and pet is quiet, alert, and responsive.

Medical Decision Making: This case calls for two separate but equally important approaches to therapy.  Stimulation of appetite and the immune system to promote healing is one aspect.  The other is treatment of the local inflammation in the tissues of the neck and upper respiratory tract.  Parasympathetic stimulation is accomplished using distant points that have direct relationships with the nucleus tractus solitarius thus facilitating vagal stimulation.  Local points adjacent to but not within the abnormal tissue can stimulate the body’s natural wound healing however are difficult to accomplish in this patient due to his disposition and the location of his wound.  Local spinal segments can be stimulated on the patient’s dorsum allow us to modulate inflammation and pain without directly interacting with the more sensitive ventral neck and face.

Acupuncture Treatment: Because this patient had never had acupuncture and is a new patient, we began each of our sessions with a relatively benign and soothing point, GV14 which he tolerated well.  Dry needling was used exclusively in this patient and he enjoyed his sessions and tolerated treatment for about 10 minutes at each visit.  Based on the patient’s response to therapy, similar points were chosen at each visit.  In addition to GV 14, Lenny was treated with GV 20 (calming and upper respiratory), ST 36 bilaterally (parasympathetic and immune stimulation), LU 1 (local point tolerated well by patient), cervical neck points along bladder channel between BL 10 and BL 11.  Unfortunately, Lenny did not tolerate any facial points or additional local stimulation.  He was also resistant to PC 6 stimulation for nausea.  Acupuncture treatments were provided once weekly though our patient may have benefited from a higher frequency but was subject to scheduling restrictions.  He received 3 total sessions.  Because it was not available, cold LASER therapy was not utilized in this case but would have been an exceptional addition to aid in wound healing.  Several days after the first visit, Lenny was sedated for a second thorough cleanup of the necrotic tissues.  His anti-inflammatory therapy, fluid therapy, and syringe feeding continued until the second treatment at which point they were discontinued.

Reflections: From this case I learned, more than anything else, that cats tolerate acupuncture well.  Lenny relaxed and purred through each of his treatments.  I was surprised to see the dramatic improvement that seemed to coincide with the commencement of his acupuncture therapy.  It is impossible to say whether he was waiting to turn that corner at that time and it was coincidence or not, but Lenny has been an interesting and very rewarding case.